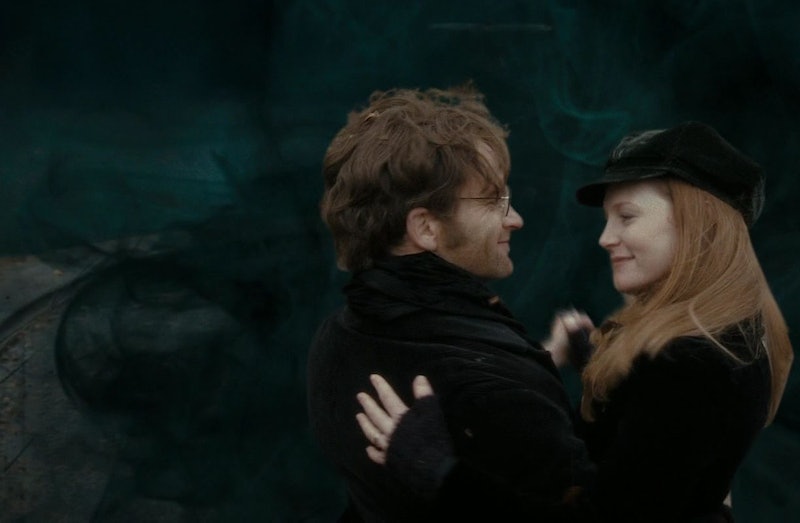 As a diehard Harry Potter fan, people are often surprised when I tell them that Lily and James Potter are two of my favorite characters in the narrative. And I totally understand why — for all that they were responsible for creating in this series, they have the approximate airtime of a couple making out in the stands at the Super Bowl. All we have to go on as far as James and Lily are recollections from the older characters, the few times Harry encounters their spirits, and the letter Harry found at Grimmauld Place.

So why, then, are people so fixated on their love story? If you've ever lurked in the Harry Potter tag on Tumblr, you'll know I'm far from alone — the Jily fandom is still going hard on photo sets and fics and head canons. A lot of people think it's because of the "enemies to lovers" archetype that plays out in their relationship, but I personally think it's because Lily and James represent a tenacious kind of hope, the last thread left in tact before the narrative truly and genuinely goes to hell for Harry. There is a kind of innocence in what is, arguably, their stupidity — marrying and having a child in the middle of a war, and trusting a childhood friend to keep them safe. There is something so genuine and childish and tragic about the whole thing that you can't help but root for them, can't help but relate to them, even though we never truly spend much time with their characters.

And it seems that, in turn, this odd fixation we have on these characters only sheds glaring light on some huge gaps in their stories. Many a fan fiction have been launched in an attempt to explain them, and many of us remain hopeful that Pottermore releases will do for us what the books did not, but as of right now, we don't have the concrete answers we're still looking for.

Why Did James And Lily Marry So Young?

Not that there is anything wrong with marrying at a young age, but their wedding would have taken place between the summer of 1978 and the autumn of 1979 — putting them at 18 or 19, just a year after graduating from Hogwarts. Considering Lily didn't come around to the whole idea of James until their seventh year, it's a little surprising that they married so quickly. I feel like there's a story here. Wink wink, NUDGE NUDGE, J.K.

And More To That Point — Why Did They Have Harry In The Middle Of A War?

I'm gonna go ahead and "@" mention the Longbottoms re: baby-making while I'm at it, because I'm genuinely confused by this. To some degree you have to admire their determination to keep on living their lives despite the carnage going on around them (and acknowledge that yeah, if anyone was going to shoot up a figurative eff you to Voldemort by having a kid while he was hunting them, it would be the Gryffindors). But just logically speaking, would your first inclination be to wait to have a kid until you could bring it into a relatively safer world? They were 20 when Lily got pregnant, so they weren't on a huge time crunch.

Basically what I'm really asking is WAS HARRY AN ACCIDENT?? J.K. Rowling, I beseech you.

What On Earth Happened To Their Parents?

I know that they had to be dead and out of the picture so Harry could logically live with the Dursleys, but again, this is never explained. What are the statistical odds that all four of Harry's grandparents would die within a few years of each other, when their kids were still so young? We know canonically that James' parents were old, but we are given absolutely nothing on Lily and Petunia's parents, who presumably died around the time Lily graduated. Did their deaths have anything to do with the Wizarding War? Is that the real reason Petunia felt like she could never forgive her sister? The deaths of Lily's parents especially seem like such a glaring hole in this narrative, especially since they were mentioned long enough that we know they were proud to have a witch in the family. After that, POOF.

Seriously, Though, Why Did They Choose Peter As Their Secret Keeper?

Like, Sirius is his godfather — literally the only one allowed to attend Harry's christening, the one that Lily is writing to while they're hidden away. This little subplot of Remus and Sirius both suspecting the other of being disloyal seems pretty unfounded, given the history of their friendship. In the meantime, we have established time and time again that Peter is spineless AF. And I get that Sirius fought the good fight convincing them to make Peter the Secret Keeper instead, but really? REALLY??

... And For Real, Why Did Dumbledore Have The Invisibility Cloak?

The night that Lily and James were killed, Dumbledore had James's invisibility cloak, and presumably kept it until he gifted it to Harry in his first year. And yet at the same time we know that he didn't really need it. After sneaking up on Harry and Ron at the Mirror of Erised, he explains to Harry, "I don't need a cloak to become invisible." So what gives, Albus?

And even if Dumbledore did need it, if you were a dude whose kid was being hunted by a homicidal psychopathic maniac with an army of loyal followers, would you seriously just be like, "Sure, old man, take the one thing that might have a prayer of keeping my family safe if the Dark Lord comes for us"? Lily and Harry could have fit under that cloak easy-peasy. I'd be sleeping under that b*tch if it were me. SMH, Potters.

Who In Their Right Mind Would Make James Potter Head Boy?

Seriously, did someone spike the pumpkin juice at that faculty meeting? He liked to hex people for fun. He was a known prankster. And yeah, he mostly grew out of it or whatever, but like, let's be real — a house elf from the kitchens would be a more effective disciplinarian than James Potter. Nay, a doorknob. Also the incredibly sweet and just and loyal Remus Lupin is standing two feet away. I NEED ANSWERS.