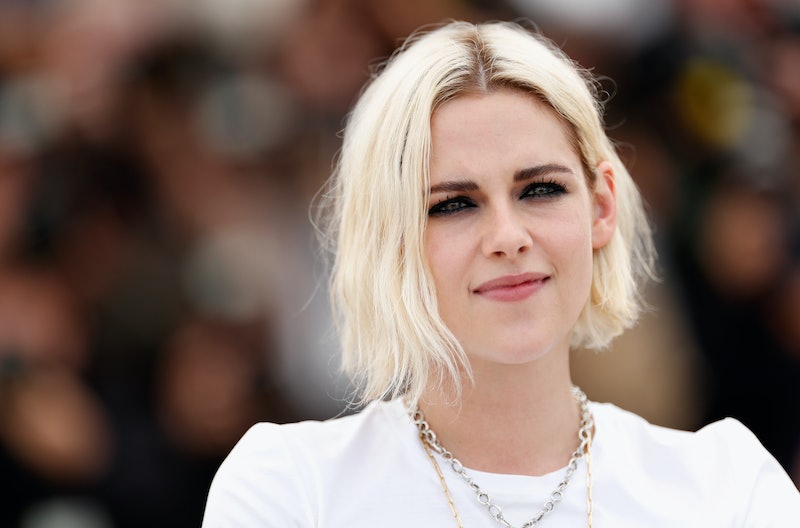 It's easy for celebrities to get pigeon-holed into iconic roles they've played, or always seem the same if they play a string of similar characters and never really switch up their look, and when they get sick of that, drastic things can happen. Kristen Stewart revealed why she went platinum, according to People Magazine, and though her reason is totally legit, her intention was slightly unexpected.

Stewart is best known for her role in Twilight, and playing such a beloved and popular character is a stereotype that's hard to break. Not to mention that she's had the same look for years and years, so that makes it even harder — and that's exactly why she wanted to switch it up. The actor spoke to People at the Cannes Film Festival, revealing why she felt like it was time to do something different. "I just did like five movies over a two-year period, and I think it’s a very good decision for me right now to stop acting in movies for just a moment, and I’ve never really done that, I’ve never changed my appearance,” Stewart said.

OK, so that seems reasonable. If you've never switched it up, you'd probably get bored eventually, but her goal was a little bit more strange. Stewart said, "I’ve always really stayed neutral since I was like 10 years old, so I was like, ‘I’m gonna direct a short, and I’m gonna f–k up my hair.'" I mean, I can't say screwing up my hair would be my intention, but hey, you do you, Kristen! And for the record, it's totally not f--ked up.

It brings out a more glam side to her, and feels totally retro. But she can wear it edgy, too, which is more her personal style:

So she may have wanted to screw up her hair, but I think it totally worked. Stewart isn't the only celeb who wanted to shake up their public image, though. After Emma Watson wrapped Harry Potter, she wanted to cut all her hair off:

Kaley Cuoco also just got extensions when The Big Bang Theory wrapped filming to remind everyone that she's Kaley, not Penny.

And Emma Roberts went the total opposite direction of her blonde Scream Queens character, dying her hair red.

Kristen, you're definitely not alone in your color-swapping thinking!