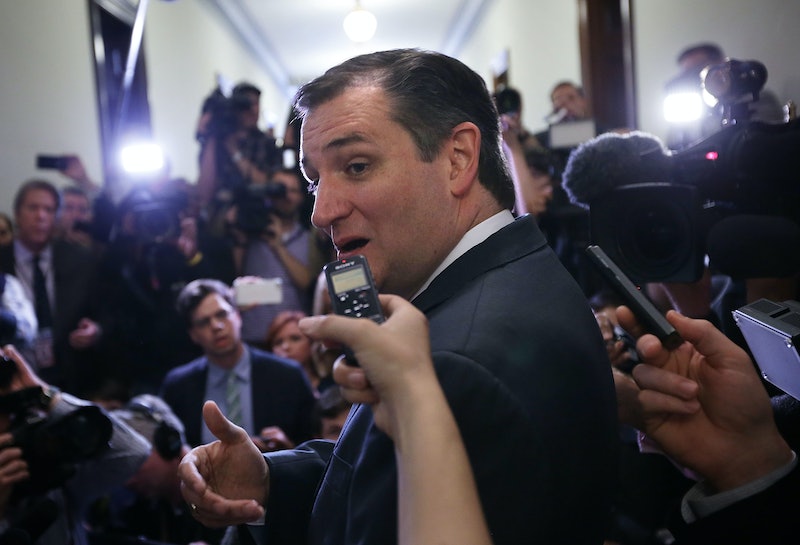 The prospect of President Trump resulting in Supreme Court Justice Cruz (ugh) was originally floated by Majority Whip Steve Scalise in April, and Trump said in May that he’d “have to think about” the possibility. But that's "not gonna happen," in Cruz's words, for a number of reasons.

First of all, Cruz himself denied any interest in an SCOTUS appointment on Friday. He told a Texas radio station that being a SCOTUS justice “is not a desire of my heart,” which is totally the kind of phrasing that a normal human being would use to express that sentiment. As odd as it sounds, he’s probably telling the truth. Supreme Court justices, while immensely powerful, tend to keep very low profiles. Cruz does not keep a low profile. In fact, his refusal to keep a low profile is part of why so many of his colleagues hate him.

This brings us to the second reason Cruz won’t be headed to the court anytime soon: He probably wouldn’t be able to win Senate confirmation. Cruz’s Senate colleagues loathe him on an intensely personal level; Sen. Lindsey Graham joked that “if you killed Ted Cruz on the floor of the Senate, and the trial was in the Senate, nobody would convict you.”

Cruz has been a thorn in the side of the Senate Republican caucus ever since his government shutdown gambit in 2013, and putting him on the court would be tantamount to rewarding him for this. More importantly, Democrats would almost certainly filibuster a Cruz appointment, and Republicans aren’t going to have a filibuster-proof majority when the next Congress convenes.

All of that said, Trump does have a bit of an incentive to keep this rumor alive. Suggesting that he might put Cruz on the court signals to conservatives that at the very least, Trump does want a conservative justice on the court. That perception benefits Trump, as it could potentially help him pick up some conservative voters who remain skeptical of his candidacy. Still, the notion of putting a guy like Cruz on the court is the kind of thing that happens in an Aaron Sorkin drama, not the kind of thing that happens in actual reality.