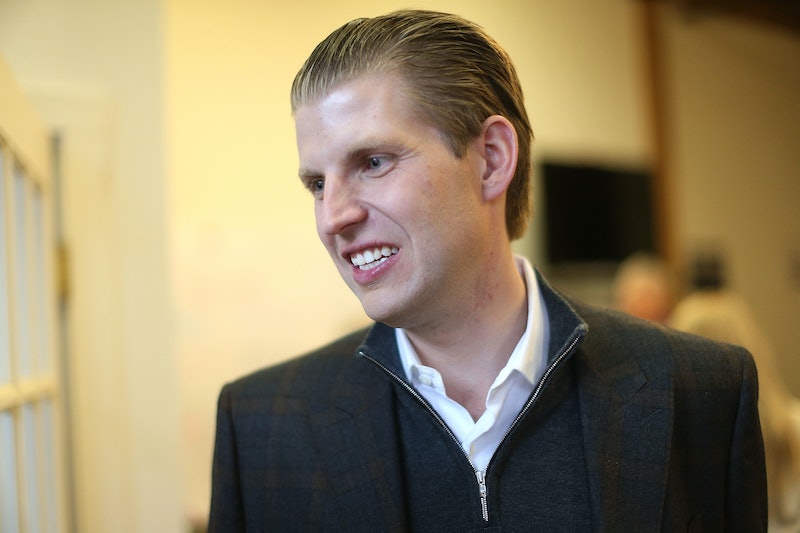 In a revealing but not terribly surprising remark, one of Donald Trump’s kids says that Trump used to goad his children into fighting each other when they were young. Eric Trump made the remarks in an interview on Fox News Channel’s Watter’s World that will air Saturday night. It’s unclear what sort of fights Eric is referring to, but no matter — this behavior is completely within character for the Donald.

In excerpts of the interview provided to Bustle by Fox News, the younger Trump was asked whether his father would break up fights between him and his brother when they were tots. Eric replied that, in fact, “he'd normally instigate the fight,” then added, cryptically, that “some things never change.”

This sounds like pretty dastardly behavior on Donald’s part, but it shouldn’t come as a surprise. In his 1987 book The Art of the Deal — which you may have heard Trump mention a time or two — the real estate tycoon recalled an incident from his past that also involved intra-sibling tension. Trump says that as toddlers, he and his brother Robert used to play with toy building blocks. One day, the future presidential candidate wanted to make a structure that required more blocks than he had. So, he borrowed some from his brother.

"I ended up using all of my blocks, and then all of his, and when I was done, I'd created a beautiful building," Trump said. "I liked it so much that I glued the whole thing together. And that was the end of Robert’s blocks."

To recap, Trump took some of his brother’s toys when they were kids, used them to make “a beautiful building,” and then became a successful real estate developer. Through that lens, Eric's comments make sense: Maybe Donald figured that goading his kids into competing with each other would serve as a positive motivating force later in life. Then again, we don’t know what kind of “fights” Trump instigated between his kids. It could have just been good-natured sibling rivalry, and hey, there’s nothing wrong with that.

Eric’s comment that “some things never change” is a bit harder to decipher. The elder Trump, of course, is known for getting into disputes with other public figures. But he’s not known to encourage fighting between other people, except if you count the time he said that public feuding between Bernie Sanders and Hillary Clinton was benefiting his own candidacy.

Maybe Eric was simply referring to his dad's generally pugnacious nature. Regardless, the fact that Donald Trump used to encourage his children to bicker with each other is par for the course, and constitutes one of the the least surprising bits of news to come out of this otherwise-crazy election cycle.