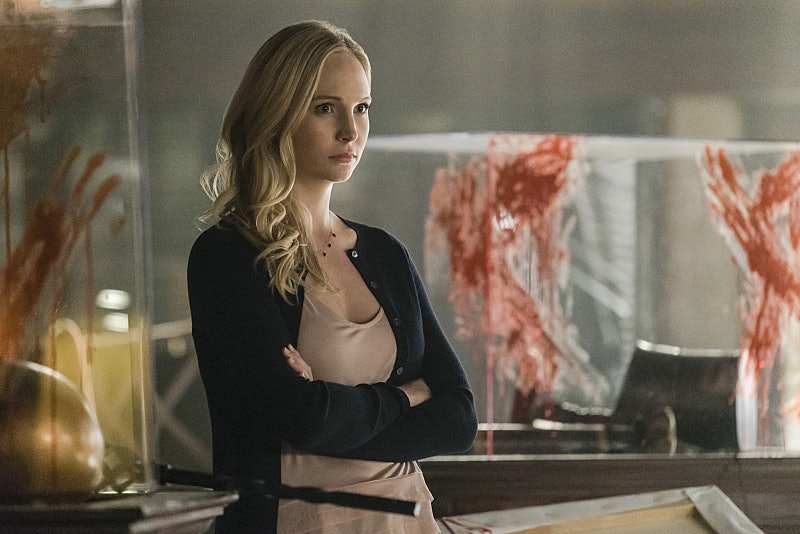 It's been an entire year since Nina Dobrev left The Vampire Diaries in last year's heartbreaking Season 6 finale, so you can imagine how amazing (not to mention downright shocking) it felt to see Elena return in The Vampire Diaries Season 7 finale, though not in the way you would expect. We didn't actually see her in physical form, but rather heard Elena's voice in The Armory vault. Undoubtedly, this was just the evil creature's way of luring Damon into its clutches, which in itself is super creepy. Like how did this thing even know about Elena, not to mention the fact that she's Damon's ultimate weakness? So not only does this thing turn people into psychopaths, but it's also all-knowing. Great! (Just kidding, not great.)

But back to the original topic we were discussing. Elena returned! (Sorta.) And yes, just in case you were wondering, that was actually the actress' real voice. In fact, it wasn't even recycled old footage. Dobrev actually came in to read those few lines, pleading for Damon to help her. "In this particular case, she came in and did the ADR, [short for automated dialogue replacement]," Julie Plec recently shared with TVLine. "We can either cobble it together from a bunch of episodes, or you can come in and see everybody and do ADR. She chose to do it in person, which was great, because it was a nice little personal Nina visit."

So even though we didn't get an actual glimpse Elena, there was a small part of her that made a legit cameo on the show Friday night. It may not have been the return we've been concocting in our heads for the past year, but I still felt good to have our former leading lady back, even if it was only for a few short moments.

More like this
Will Vampire In The Garden Get A Season 2? What To Know
By Kadin Burnett
Twitter Has Very Mixed Feelings About The New 'American Idol' Winner
By Jake Viswanath
Kaley Cuoco & Tom Pelphrey Just Made Their First Public Appearance As A Couple
By Hugh McIntyre
'Ghost In The Shell: SAC_2045' Was Only Supposed To Last Two Seasons
By Kadin Burnett
Get Even More From Bustle — Sign Up For The Newsletter