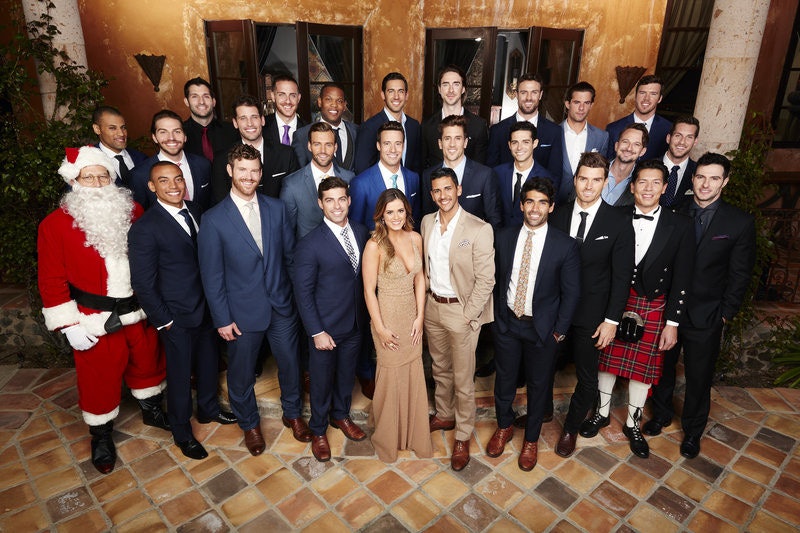 In case you missed it, ABC recently released the contestants for JoJo Fletcher's impending season of The Bachelorette — and along with photos of their smiling faces, their bios. The 26 eligible suited-up suitors range from former NFL quarterback to "hipster" (his actual job title), from men who think they might be funny, to men who actually have a good chance at being funny, and from men who could potentially be purveyors of feminism, to men that probably aren't. I'm not saying we have another Juan Pablo on our hands, but as evidenced by the anti-feminist quotes from the 2016 Bachelorette bios, these guys might have some learning to do when it comes to the respect and equality of both genders.

Now, those who have long scrutinized The Bachelor/ette franchise as one rooted in some deep patriarchal standards, will likely read this and think "of course!" or perhaps more aptly, "not again!" I hear you. I do. Nonetheless, that doesn't mean this season's totally doomed. I mean, at least we're starting out on the right foot with just one Bachelorette this time around, right? Still, here are some not-so-feminist things that a few of the contestants have said in their bios — you know, just in case you need to prepare yourselves for the wild — possibly tinged with sexism — ride this year.

Mmmm OK, Ali. That's nice (ish), but that's the first and only thing you thought of when asked this question? How your date dresses? Maybe you should try to be less superficial, bro.

"What’s your biggest date fear? That she doesn’t look like she does in pictures. Or when on a date, she embarrasses me in a restaurant."

That's your biggest date fear?! What about being murdered? I'm just saying. There are bigger things to worry about than whether or not someone looks different in real life than in photos.

"What are your deal-breakers when it comes to relationships? Girls with chipped nail polish, girls who talk too much, narcissists, clingers, girls who have serious food allergies."

I have no words. I do, however, have a very serious allergy to peanuts. And to misogyny. Safe to say, it would never work between us, Evan.

"Do you consider yourself a romantic and why? Yes, even if I’m just hooking up with a girl, I still do cute stuff for them all the time."

What he's really saying is that when you're "just hooking up with a girl" you totally don't even have to do cute stuff for them or be nice, and if you do, you should def be lauded for it.

"I love it when my date…: Doesn’t attempt to pay for the bill. Two things women shouldn’t touch on a date: The door and the bill."

And, I love it when a dude starts any sentence with what women should or should not do. *Rolls eyes*

"I love it when my date…: Pretends to reach for the bill. We appreciate the effort!"

'Sup with all this lady bill paying talk? Saying you appreciate the effort makes it sound like you are placating the woman for trying. I mean, I appreciate your effort in trying to sound like a gentleman, but trust me when I say that if she reaches for the bill, homegirl can pay.

"If you could be someone else for just one day, who would it be and why? I would be the woman I want to marry so I could find out what’s in her head. Plus, I’m pretty sure I could only last a day being inside a woman’s head. :)"

First of all, a little creepy. Second of all, rude. Third, not with that attitude you couldn't.

So like, who's excited for JoJo's season now? Jokes, jokes. But really, I'm pulling for none of these guys to make it past night one.