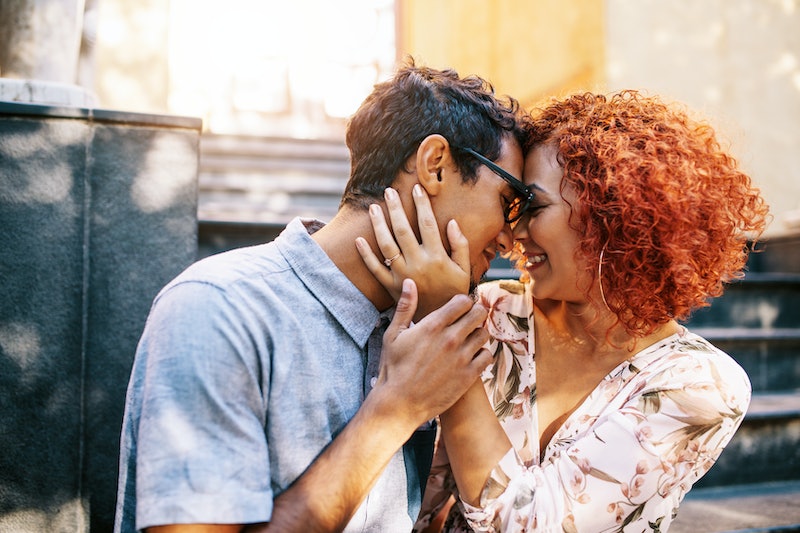 Saying "consent is sexy" can sometimes trivialize the fact that it's also mandatory. But... it is also sexy. And the video series F**k Yes shows exactly what I mean by that. Through sexy scenes and hot dialogues that embody affirmative consent (the standard that says only "yes" means "yes"), the series shows that consent doesn't have to "kill the mood," "interrupt the flow," or any nonsense like that.

"Protection," in fact, tackles both consent and safer sex. In the scene, a couple is hooking up when they realize they don't have a condom. After discussing the fact that they don't want a baby, he decides to run to the store. But first, he describes what he'll do when he gets back, and she says what we should all be saying to our sexual encounters: "f**k yes."

Co-creator Emily Best tells Bustle over email that she felt "robbed" when she first found out you could actually talk about what you wanted from a sexual relationship before it happened. "What I had learned was that this kind of affirmative consent was anathema to what makes sex 'sexy,' which I had been taught were ethereal things like 'chemistry' (whatever that means)," she said. "And yet, at least among my friends, we can all recount incredibly sexy experiences of affirmative consent."

"Our hope is that this is a conversation starter for couples, educators, friends, and family to start to merge what we know is necessary: consent with what we think is sexy," she added. "They can and should be one and the same."

"We hope to get people used to hearing what's explicitly and enthusiastically a 'yes,' and having that in and of itself be exciting," Elisabeth Aultman, another creator of the series, added. "We also hope to demonstrate that a 'yes' is not an object, it's not a check mark on a to do list, it's not a signature on a contract — it's a play in a team sport where winning is defined by everyone having had a good time."

While this may seem obvious, it's not something a lot of people get in their sex lives. Too often, people — women especially — are treated as instruments for someone else's pleasure and not taught to prioritize their own.

You can see the first episode below, but don't say I didn't warn you — whatever room you're in is about to get hot, so I suggest you take off any extra clothing layers you're wearing. You can also stay updated on future episodes on F**k Yes's Facebook and Twitter pages and its Youtube channel.