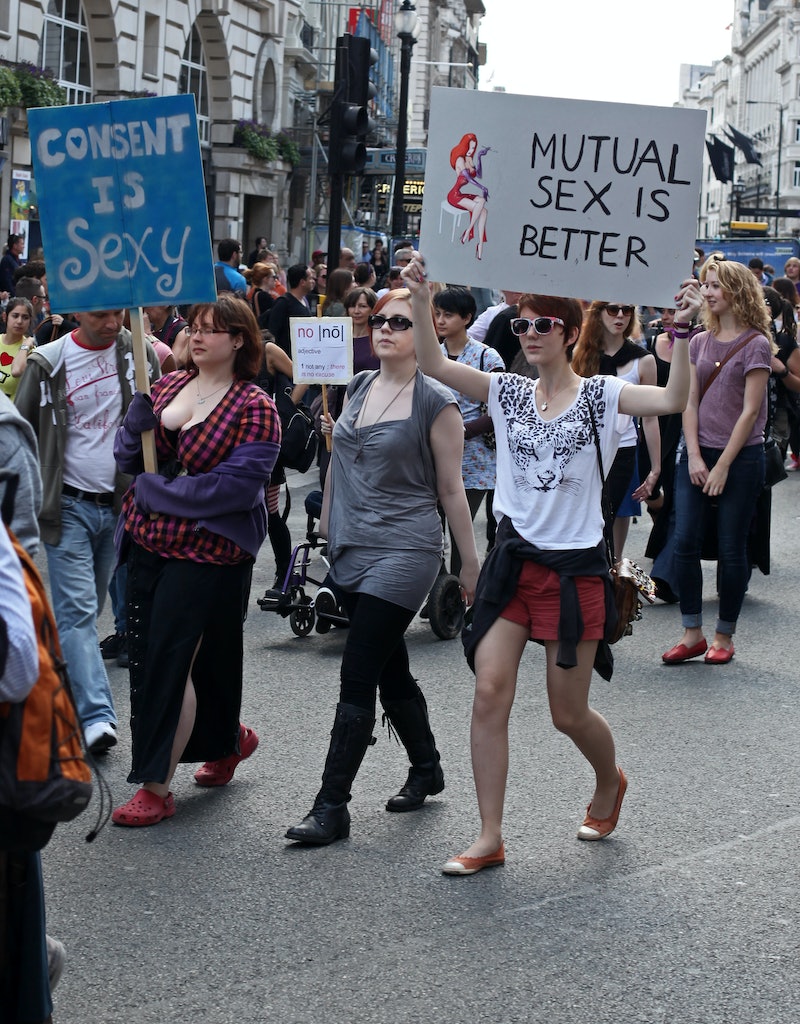 Whether someone is trying to understand whether they were a victim or trying to avoid being a perpetrator, affirmative consent offers a clear answer: Sexual assault took place if somebody did not overtly consent to the encounter. Affirmative consent "teaches people of all genders that it’s easy to make sure you’re not hurting anyone during sex: Just show up and pay attention to your partner; listen to what they’re telling you; and if you can’t tell, you have to ask," Friedman writes. While this practice should be an ethical guideline everywhere, the government is also getting on board: both New York and California have laws requiring affirmative consent on college campuses, and many individual schools around the country require it as well.

Why, then, do so many still balk at the idea of affirmative consent? The arguments against it largely don't hold up. These five common anti-affirmative consent arguments, for example, all have glaring holes in them. Let's take a look at where they each fall through:

Consent laws are in place to protect everyone, because everyone is in need of that protection. In fact, the "yes means yes" standard helps dispel a lot of myths surrounding men and sexual assault, such as the myth that an erection is consent and the myth that men automatically consent because they want sex all the time.

Some say it wouldn't be realistic to only take "yes" as "yes" because women are conditioned not to pursue sex, so people who sleep with women need to read between the lines and decide what a "no," or silence, or an "I'm not sure" really means. "I told a man, 'Look, I’m not going to sleep with you,' and it was taken as, 'Try again in a couple of hours.' He did, and it worked," writes Cathy Young in another Washington Post op-ed. But Young's experience with people who take "no" as "try again" is not necessarily the same for everyone. Usually, when someone says "no," it's because they don't want something. If you bank on the chance that "no" means "maybe — convince me," you risk making somebody else extremely uncomfortable and unheard.

It's true that many people are embarrassed to express a desire for sex, but that's another problem affirmative consent can fix: Someone who may not be confident enough to say "I want to have sex with you" will have an easier time saying "yes" when asked. And if someone's not sure enough of what they want to give an unequivocal "yes," it may not be the best idea for them to have sex in the first place. There's nothing wrong with waiting. In fact, one important purpose of asking "are you good?" or "do you want this?" is to make someone consider whether they're really comfortable with a sexual encounter, or if they just feel like they should do it or want to please their partner or are ready physically but not emotionally. If someone says "no" initially and then expresses that they've changed their mind, there's nothing wrong with that, but if a "yes" has to be forced out of someone, it likely wasn't really a "yes" to begin with.

3. Argument: "It's Not Realistic To Ask People To Discuss Everything That Happens During A Hookup"

Consider the alternative. What's worse: having discussions in the bedroom that make you uncomfortable or potentially sexually assaulting someone? In addition, this argument hinges on the fallacy that because many people don't currently ask for consent, there's something about human nature that makes this simply impossible. But there's nothing stopping anyone from doing things differently going forward than they have in the past. After all, we ask people permission for other things, like if we can stop by their house or borrow items from them. Why can't we take this same courtesy to the bedroom? It may not be the norm right now, but that's all the more reason to create a new norm — and besides, whenever what you're planning to do involves doing it to or with another person, it's always reasonable to want to make sure everybody's on board first.

Affirmative consent policies show "little regard for the preferences of people who like intuitive give-and-take rather than requests and directions," writes Young in her WaPo op-ed. But compromising a bit on spontaneity seems like a small price to pay to avoid violating and traumatizing someone — and moreover, getting consent can be sexy in and of itself, and it can involve "intuitive give and take." If talking about sex were a buzzkill, Friedman points out, "phone sex wouldn’t be such a lucrative business." Communication about consent doesn't have to involve legal documents or formal terms; it can be as simple as asking, "Do you want me to __?" or "Are you ready?" or "Do you like that?"or even just touching the piece of clothing you want to remove and saying "Can I?" All of these actions make sure you have continued consent for what you're already doing — and they can be incredibly hot, too, as blogger Bimbo Toys For Pretty Boys pointed out back in July of this year.

Sure, it might seem embarrassing to ask these things if you're not used to it. But once affirmative consent becomes the norm, the embarrassment will fade — and, indeed, we might one day look back on the times before affirmative consent was the norm and think, "How weird is it that it wasn't always like this?"

5. Argument: "Some Men Would Just Never Get Laid If Only 'Yes' Meant 'Yes'"

Again, affirmative consent isn't just about making sure men get consent from women. It is required for people of all genders, and it is there to protect people of all genders. But some people still adhere to the outdated notion that women are less sexual beings and men must convince them to have sex. This attitude can actually encourage sexual assault: Men become pushy physically or verbally because they've been taught they must do everything in their power to get women to have sex with them, or else nobody will. This way of thinking not only denies women's humanity but also contributes to the problem — the alleged shortage of women as sexual partners — it supposedly solves. When women learn that they are less sexual than men despite evidence to the contrary and that it is their job to keep men's sex drives in check, they are less likely to feel free to sleep with whomever they want. One study showed that women were just as likely to pursue casual sex when told they were safe and nobody would find out. Well, one obvious way to ensure safety is to practice affirmative consent. And even if people don't consent to sex with you, that still doesn't mitigate pressuring or coercing them. Being rejected hurts, but it's nothing compared to being assaulted.