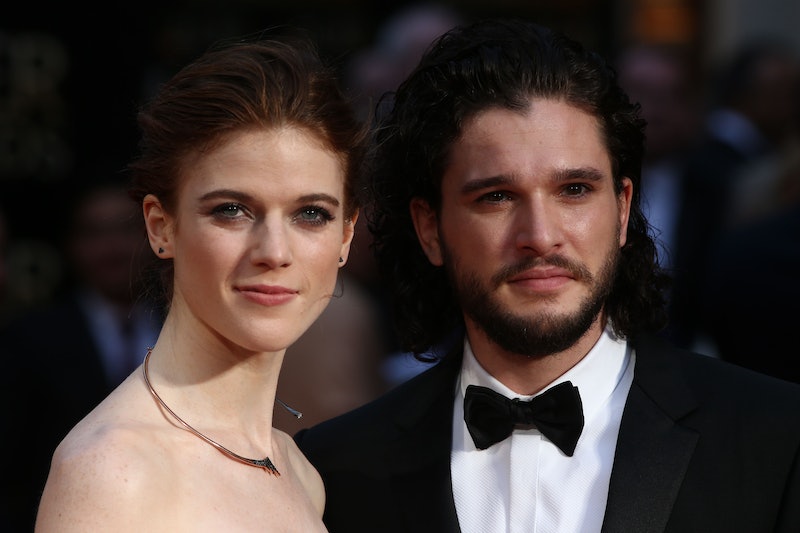 There is no room for happy endings in the world of Game of Thrones. Even wildling Ygritte and Jon Snow were doomed, and I think everyone can agree those two were made for each. Luckily, Kit Harington and Rose Leslie are together in real life, proving that love does conquer all — even breakups and being killed off of Game of Thrones. Harington and Leslie have had an on again, off again romance since they met on the set of the hit HBO series way back in Season 2, and now they are very much on again according to Harington.

During an interview with Vogue Italia, Harington dropped a quote so romantic it would make Jon Snow proud. When asked what his favorite Game of Thrones set memory was, Harington said: "The three weeks in Iceland when we were shooting the second season. Because the country is beautiful, because the Northern Lights are magical, and because it was there that I fell in love. If you’re already attracted to someone, and then they play your love interest in the show, it’s becomes very easy to fall in love."

Yes, he was talking about Leslie, and yes, Ygritte and Jon fans should be swooning just as hard as Leslie and Harington fans. The real life romance between these two wonderful human beings is a ray of happiness in the bleak world of Westeros, even though it is happening off-screen. Here are 11 reasons why Jon and Ygritte fans will love Leslie and Harington's relationship.

1. Because You Still Get To See "Jon" & "Ygritte" Together

Harington and Leslie's adorableness is not quantifiable. While Ygritte is long gone from the show, seeing Leslie and Harington at events together is enough to melt even the coldest of hearts.

2. They Channel Jon & Ygritte In One Interesting Way

The pair are notoriously quiet about their private lives, much like their onscreen counterparts. Also like Jon and Ygritte, even though they try to keep their relationship to themselves, they are terrible at it because everyone who sees them can tell how much they adore each other.

They are living, breathing muses, guys.

4. They Make Season 2 Even More Epic In Retrospect

Season 2 was one of Game of Thrones very best, and a big part of the season's charm was the relationship between Jon and Ygritte. Knowing the actors were falling in love at the same time their characters were adds an extra layer of beauty to their scenes.

5. It Keeps Leslie In The Game Of Thrones Family

Leslie is an incredibly talented actress whose post Game of Thrones career is thriving. Still, it's nice to know she is still part of the Game of Thrones family, and even still hangs out with them thanks in part to her relationship with Harington. According to E! Online, Leslie, Harington, and Sophie Turner (Sansa) met up at LAX earlier this year, and that's just one of several times the couple have hung out with their Game of Thrones buddies.

6. Because Leslie Is As Coy As Ygritte

During an interview with Jimmy Fallon, Harington revealed he told a handful of people about Jon Snow's fate, and one of those people was his girlfriend. Meanwhile, when Leslie was interviewed by Sky TV she kept Harington's secret and said she didn't know Jon was alive until everyone else did. Now that is some Ygritte level loyalty.

7. Their Romance Leaves The Door Open For Future Collaborations

Doesn't every Jon and Ygritte fan want to see these two onscreen together again in the future? I know I do because chemistry like theirs is rare.

During the Fallon interview, Harington rattled off a long list of people who he told his Jon Snow secret to, including a police officer. It was such a Jon move, you can practically hear Leslie muttering, "You know nothing, Kit."

9. Because Their Relationship Is Complicated, But Full Of Love

Harington and Leslie have broken up at least once, possibly twice, in the past, but they keep finding their way back to each other. Just like Jon and Ygritte, they just work even though no relationship is easy.

10. Harington Said It Was "Easy" To Fall In Love With Leslie

According to that Vogue interview, it sounds like Harington fell for Leslie almost as quickly as Jon fell for Ygritte. These two are too cute for their own good.

11. They Give Ygritte & Jon A Real Life Happy Ending

Harington and Leslie are the gift that keeps on giving for fans of Jon and Ygritte. Your TV 'ship may be over, but thanks to the actors, Jon and Ygritte's legacy lives on.