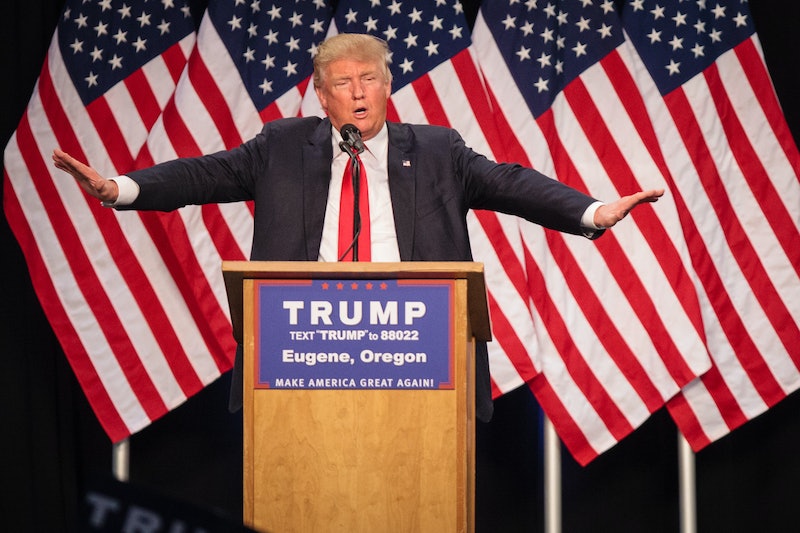 So, what do you do when you're caught? That's the question that presumptive Republican nominee Donald Trump seems to be facing. On Friday, the Washington Post reported on allegations that the billionaire businessman impersonated his own publicist in the early 1990's, spreading boasts about his business affairs and love life under a pair of pseudonyms: John Barron and John Miller. And the approach he's going with, well... let's just say it isn't a great look. Donald Trump's embarrassing response to the John Miller story, in fact, is a pretty sterling example of why he's not cut out to be commander-in-chief.

In case you missed it, the basic story is pretty simple, but also pretty illuminating. According to Marc Fisher and Will Hobson of the Washington Post, Trump on multiple occasions spoke to reporters on the phone as though he were a publicist (sometimes named John Barron, sometimes named John Miller) describing the real estate magnate's affairs in the third person. Some of the conversations, unsurprisingly, were quite braggadocios, blunt and boastful about Trump's career success and womanizing, in much the same style that's such a potential problem for him now, as a general election candidate.

If you'd like to judge for yourself, you're in luck! Hobson and Fisher's article also includes a full 14 minutes of audio recordings of Trump's "publicist" at work, and if you listen to it, you'll likely find it easy to come away with the same conclusion the reporters did.

On the one hand, to be as fair and deferential to Trump as one possibly could, it's not unheard of for celebrities and tabloid figures to plant stories about their own lives. But what makes the Miller/Barron story so confounding is the person-to-person deception it alleges ― that Trump thought he could passably get away with it, that he'd be able to keep such a secret while acting as the messenger for his own self-promotion. In the midst of a lawsuit in 1990, when asked whether he'd ever used the alias John Barron, Trump testified under oath that he "[believed] on occasion I used that name." Also, there are a whole lot of reports on Trump from that era that cite Barron as their source.

For the purposes of the here-and-now, however, that 1990 admission of the Barron alias looms large. Because on Friday, with the story roaring through the mainstream media, Trump offered a blanket denial to Savannah Guthrie on NBC's Today, insisting that "it was not me on the phone," that it didn't even sound like him, and calling it a "scam." It's tough to overstate how staunch the denial was, especially in light of how damning the reported facts appear to be.

While you can take Trump's denials for what you will, it's hard to argue with the full report as Fisher and Hobson laid out. And when you combine it with the fact that Trump previously admitted under oath he may have used the John Barron name, it's more than enough to raise some questions. But really, it's the denial now that should give people genuine, renewed pause ― generally speaking, you don't want your president relying on the Shaggy defense.

All in all, it's a bizarre and somewhat telling story. But what's maybe most vexing is that the impact probably would have been negligible if Trump had simply come out, confessed, and put it behind him. Election day is still months and months away, and by the time it rolled around it probably would've been forgotten. The fact that the simplicity and limited risk of coming clean either didn't occur to Trump and his campaign, or didn't win out, is a stark reminder of just how a Trump administration might operate.