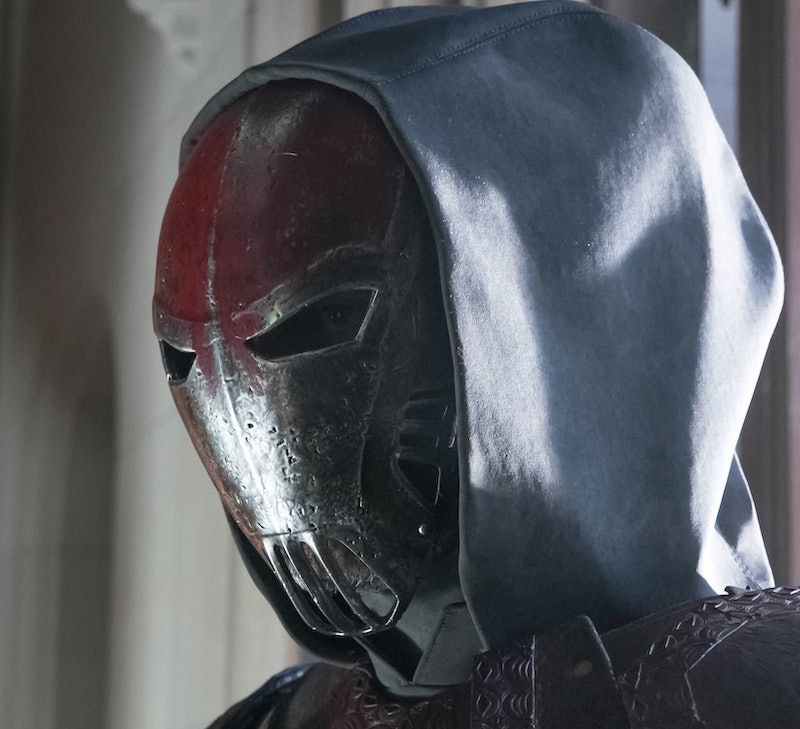 The villain formerly known as Theo Galavan was rather dramatically blown up with a rocket launcher at the end of his last appearance, but you may still be wondering — will Azrael return to Gotham ? It's not as crazy of a question as it seems, even if I don't think he'll pop up without some kind of explanation. Because while most shows might struggle to figure out how to bring back a previously deceased character, Gotham is loosely based on comic books, where characters rarely stay dead and there are dozens of ways to bring them back to life. While Gotham is more constrained than a comic book because it has real human actors who need to be available in order to film the episodes, it's been able to pull off some pretty impressive continuity so far, "killing" characters off without having to write them off the show forever.

And Gotham has already pulled this move once by bringing Fish Mooney back from the dead almost an entire year after it killed her off. So, even if Galavan/Azrael doesn't return by the end of Season 2, there could always be something else on its way in Season 3 that could justify his resurrection. But for now, there are plenty of ways that the show could justify how and why Galavan — or Azrael — could make a return.

This would make for the speediest possible return. One Galavan explodes, another Galavan could appear in the very next episode, since Strange spent a long time trying to figure out the key to resurrection. Now that he knows how to bring people back, why stop?

I don't see how, but it's possible that somehow the explosion didn't actually kill Azrael. He did return from the dead with some special powers, maybe we're about to discover another one that protected

Strange was able to pull it off once, so it's possible that he could resurrect Galavan from the dead for a second time. However, that is a little unlikely given that it looked like the only remainder of Azrael after that explosion was literally on fire. Strange was able to save Brigit Pike after she was badly burned, but the charred remains of a corpse seem pretty hard to work with, even for a mad scientist.

This hasn't made an appearance on Gotham yet, but it is a staple of the Batman comics, particularly in the lore of villain Ra's al Ghul. Lazarus Pits are supernatural areas that can resurrect people... so that could be one simple way Azrael comes back to life.

The Church Of St. Dumas

Azrael is an important figure in the lore of The Church of St. Dumas, and while the religious cult hasn't gained much power outside of Galavan's quick takeover of local politics, perhaps its final Gotham "miracle" could be bringing its leader and champion back to life.

While it's very possible that those flames were the last Gotham will ever see of Theo Galavan or Azrael, don't be too surprised if you see him return, even if it takes a while.