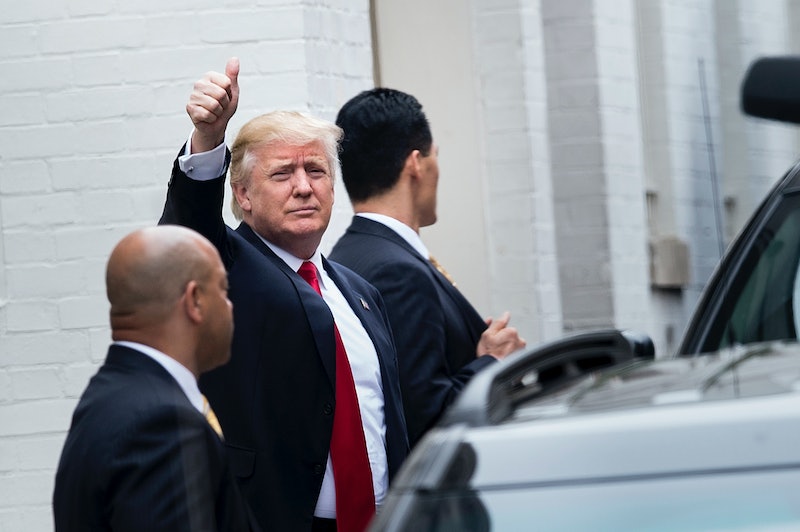 We'll find out whether or not Donald Trump gets to speak for the entire country in November, but election aside, there's no denying that Trump can certainly speak for himself. He has an unmistakable tone of voice and an undying ability to speak without any sort of filter. It seems unbelievable, then, that Trump would use a fake name like John Miller to disguise himself as his own publicist — or, at least, unbelievable that he'd get away with it.

First things first: If you've heard talk of a John Miller who's somehow connected to Trump, you'll have a hard time proving that such a Miller actually exists. According to The Washington Post, Trump did in fact use the names John Miller and John Barron throughout the 1970s, '80s, and '90s to pose as his own spokesperson in phone interviews with members of the media. (If the name Barron strikes you as familiar, there's good reason. Trump later named his youngest son, with current wife Melania, Barron.) The Post obtained a recording of a phone interview between Miller and Sue Carswell, then a reporter at People magazine. The interview took place in 1991, as Trump was divorcing his first wife, Ivana. The voice sounded enough like Trump's that it got Carswell wondering. As the Post reports, plenty of sources close to Trump confirmed that it was the businessman himself on the other end of the phone.

Trump has denied that the recording matches his voice, but that hasn't slowed the speculation. Saturday Night Live even incorporated the joke into what has become near-weekly satire of Trump's campaign. Since he has denied it, though, let's give Trump a rare benefit of the doubt and see who the probably-fake Miller could actually be.

As it turns out, there is at least one John Miller in public relations. A California-based John Miller runs his own eponymous public relations agency, serving Silicon Valley businesses, advocacy groups from across the country, and other clients. However, Miller, who was contacted by several media outlets following the Post's story, confirmed that he has never represented Trump.

There's also at least one John Miller in Trump's own stomping ground of New York City. That Miller serves as the deputy commissioner of intelligence and counterterrorism of the New York Police Department. He previously worked as a journalist for ABC News, where he once interviewed Osama bin Laden, and as a spokesperson for the FBI. As such, he could be a good ally for Trump to have in the White House, but it doesn't appear that there's ever been any connection between the two.

For now, the John Miller that previously worked for Trump appears to be none other than the presumptive Republican nominee himself. If he's elected, perhaps part of his economic policy could be to save the government some money by taking on the role of press secretary himself. Considering his history with off-the-cuff, sometimes offensive statements on the campaign trail, his alter-ego PR counsel would hopefully advise against that.

More like this
Yes, Billboard Queen Angelyne Really Ran For Governor Of California
By Brad Witter
How To Support Gun Control Reform Right Now
By Morgan Brinlee and Carolyn Steber
10 Times Diana & Meghan Spoke Similarly On The Royal Family
By Sophie McEvoy
The Church Of Scotland Votes To Allow Same-Sex Marriages
By Sam Ramsden
Get Even More From Bustle — Sign Up For The Newsletter