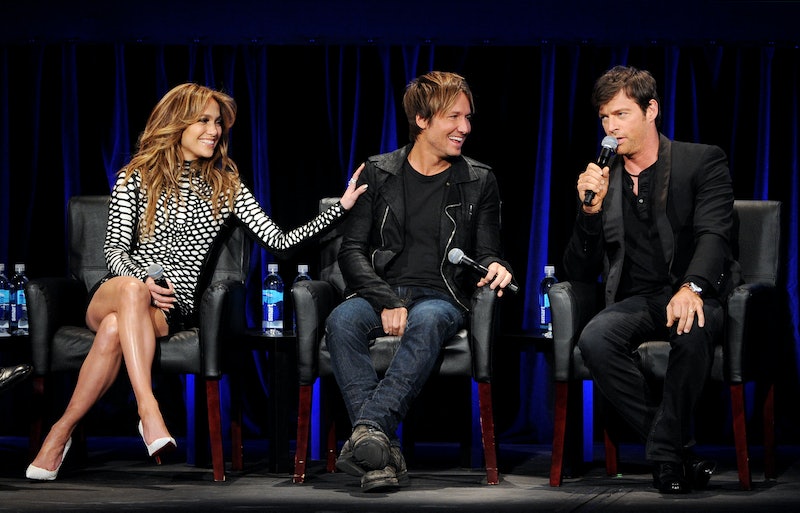 The top 10 male contestants to make the cut were revealed on American Idol last night in the second episode of Rush Week. Following suit from the girl's round Tuesday night, five men were also eliminated without having the opportunity to sing for America's vote. The music industry is cut throat—looks like the the contestants are learning that sooner rather than later.

But, that's not the only lesson that the contestants have yet to learn. The trending major issue among both the female and male groups of contestants this week was their song choice. Surprise, surprise.

Emmanuel Zidor chose a dramatic interpretation of the overdone Idol favorite, "Best of My Love," while George Lovett tried his hand at Bruno Mars' chart topper, "Grenade," singing exactly as it is heard on the radio—except off-key. The ladies also had their fair share of selection errors. Marrialle Sellars picked Katy Perry's "Roar," and sang it exactly like Perry does—except it was no roaring performance. Emily Piriz raised eyebrows yet again with judge Harry Connick Jr. when she picked to sing the sexually-charged song, "Paris (Ooh La La)."

Year in and year out, song choice is always a major problem for contestants. With an on-point song choice, the performance can bring audiences to their feet and win them the crown. With a dud, they lose America's attention and highly risk elimination. If the contestants wish to prolong their American Idol stay, we suggest they heed our advice and follow our four rules for picking a song—they can thank us later.

If it's a song that has stood the test of time, do yourself a favor and don't sing it. We know every singer would love the opportunity to belt out Whitney Houston's "I Will Always Love You" or Gloria Gaynor's "I Will Survive," but it will only end in turmoil. Not only will the judges and America compare you to the original, but they will also probably judge you for your lack of obvious creativity. If you try to sing it differently from the original, it just wouldn't sit right and you will suffer as a result.

2. Don't sing the most popular song on the radio.

Much like the classics, the most popular songs on the radio are really risky territory for contestants. Sing it well and you'll be compared to the original. Sing it poorly and you'll be compared to the original. However, there is one exception. Contestants could pull off a chart-topper if they sing a completely new rendition of it. For example, during Hollywood Week, Kenzie Hall did an acoustic version of Macklemore's "Can't Hold Us" that sounded awesome, but nothing like the rapper's version which was both refreshing and impressive. Unless the contestant can drastically change the way they sing the chart-topper, they should leave it where it belongs—on the radio.

You would be doing yourself a disservice if you decided to sing "Lovesong" fresh off of Candace Glover's win or "I (Who Have Nothing)" which has been sung by pretty much every female finalist since Jordin Sparks. Just like Zidor learned this week, you will be compared to the previous contestant that already sang the song on the show and will ultimately look like a giant copy-cat.

4. Know what you're singing about—and make it appropriate.

When Connick asked Jena Asciutto why she wanted to sing the Rolling Stone's "Paint It Black" this week, she couldn't offer up a solid reply other than that she likes the song. If you're a contestant on Idol, you have the potential to win and begin a very successful career in the music business, a la Kelly Clarkson and Carrie Underwood. Hopefully, you will be releasing albums and in the process, become a major star. With that kind of career possibly looming in the distance, we would hope that all of the contestants know who they are and why they sing what they sing.

It's not enough to have a good voice—the contestants need to connect with their audience on a deeper emotional level through the songs they chose and the lyrics they spurt out. It's not enough to simply "like the song." We hope that every contestant thinks long and hard about the reason behind why they're singing the song they picked and whether or not it is appropriate for their age. Maybe after some long deliberation, they'll decide not to pick the song that's all about getting down on your knees to please a man.