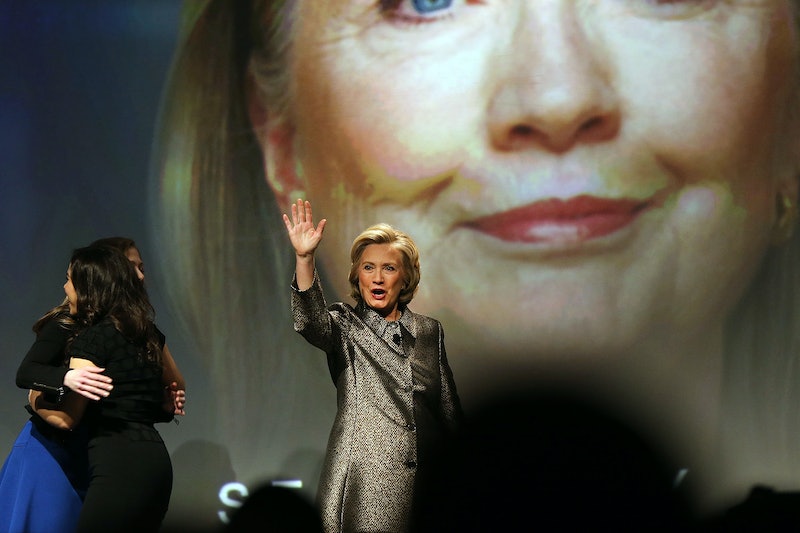 It's always difficult to have a conversation about money in politics. On the one hand, it obviously costs money to run a campaign — and a lot of it, too. But on the other hand, that gets really easy to abuse, and really fast. During this election in particular, there has been extra focus on money. From Bernie Sanders' record-shattering fundraising, to Donald Trump's self-described self-funded campaign, to the scrutiny surrounding Hillary Clinton's campaign contributions, money has been a driving issue. How much money has Hillary Clinton raised during this election cycle? More than any other candidate so far.

Although companies don't typically donate directly to a candidate, Clinton's campaign has reportedly received significant funding from employees of several major corporations, such as Euclidean Capital, Saban Capital Group, and DreamWorks. Most likely due to her wildly successful fundraising, Clinton has reportedly not contributed any of her personal wealth to her campaign efforts.

On the complete opposite end of the spectrum, Donald Trump really is running a vastly self-funded campaign; 75 percent of his spending so far, more than $36 million, has been covered by his personal fortune, while his campaign committee has raised only about $12 million. Trump has also taken very little money from outside groups, just as he touts during his speeches. The now-defunct Make America Great Again PAC raised just under $2 million before it was shut down in October. Similarly, Great America PAC has spent over $14 million on television advertising, offering additional media support for Trump, but that does not get factored into the total amount contributed by outside groups. However, there are speculations that Trump's self-funded campaign is a lie.

What's really remarkable about all of this is Trump's success compared to his spending. During primary season alone, Mitt Romney spent over $76 million (by March 31, 2012), while John McCain spent close to $79 million. Trump's dominance is blowing a huge hole in the theory that you have to spend a lot to win a major party's nomination. Although his spending totals are likely to drastically increase when the general election comes closer, candidates will probably try to emulate his rise to the top of the leader board on such a small budget for years to come.

Money in politics is incredibly important because it can exert undue influence on politicians when they are significantly indebted to corporations and individuals for helping them reach their offices. Scrutinizing campaign finances isn't the most fun aspect of elections, but you should know where your candidate is getting their money.