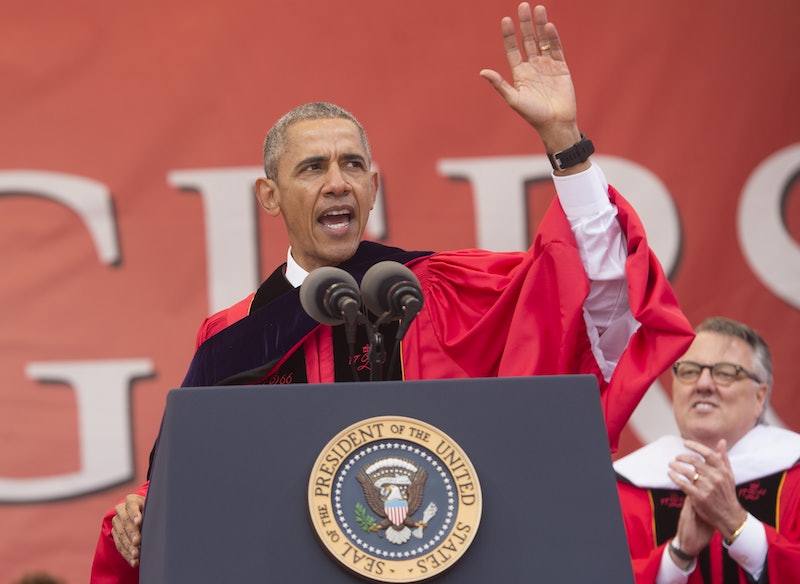 In terms of this year's commencement speeches, President Obama is two for two. On Sunday, Obama spoke at Rutgers University's commencement in New Jersey, just about a week after giving the commencement address at Howard University in Washington, D.C. It was the first time that a sitting president had spoken at Rutgers' ceremony, but Obama's inspirational and timely speech was well worth the wait.

Obama's speech focused on progress, noting the important time in which this year's graduating students are entering the real world. It seemed particularly relevant given the ongoing presidential election, as Obama seemed to encourage the almost-grads to take action in society and at the polls. The New Jersey primary, where many Rutgers students would likely vote, will take place on June 7, but the deadline to register to vote is Tuesday.

Last weekend, Obama gave a similarly inspirational and relevant speech at Howard University, a historically black university not far from the White House. In that address, Obama explicitly encouraged the audience to vote, noting the trend of low voter turnout among young black voters. From an interview published on Thursday in Rutgers' student newspaper, it was clear that Obama was ready to deliver another pointedly timely speech to the New Jersey crowd on Sunday.

"I came here because you asked," Obama said to the Rutgers crowd. Rutgers celebrated its 250th anniversary this year, and students had campaigned long and hard to have Obama there to mark the occasion. "I even got three notes from the grandma of your student body president," he continued. "I have to say, that really sealed the deal... I have a soft spot for grandmas." The takeaway? Always ask for what you want, be it a raise, a job, or a discount on that post-graduation plane ticket — and if what you want is a particular president, you'd better vote.

"Progress is bumpy, it always has been," Obama said. He went on to encourage the soon-to-be grads that it's people who can overcome those bumps and shape the change that comes to their country. Judging by his earlier interview with the student newspaper, Obama probably meant to imply that the current political landscape is quite bumpy, as is life for a young 20-something trying to figure out his or her life.

"When you hear someone longing for the good old days, take it with a grain of salt," Obama advised. As in his address to the Howard University class, Obama compared his generation to the current crop of college graduates, noting the vast innovation that has occurred over the years. "We live in a great nation," he said, possibly throwing some shade at a certain Republican's tagline, which implies that the country needs to somehow return to greatness.

Throwing some even more direct shade at Donald Trump, Obama said, "The world is more interconnected now than ever before, and it's getting more connected every day. Building walls won't change that." The president rattled off several of the issues he has tackled during his two terms, including ebola, terrorist attacks, and economic inequality, and demonstrated how a wall would not have helped him respond to any of those issues. Politics aside, the inspirational message was one of doing good. "To help ourselves, we've got to help others," Obama said.

O.K., the anti-Trump talk didn't end at walls. Obama touted the value of experience and intellectualism in society, and he came uncannily close to explicitly saying that Trump is not prepared to succeed him. Still, he managed to maintain the real-world connection in his message, relating everything back to a lesson for the class of 2016. "In politics and life, ignorance is not a virtue," Obama said. "It's not cool to not know what you're talking about."

Obama seems to know that you might have trouble deciding whom to vote for later this year, but he clearly doesn't care. In his address to Rutgers, as well as in his address to Howard, the president pleaded with the young audience to get them to the polls. "Apathy has consequences," Obama said, noting that the majority of young people who don't vote determine the outcome of elections just as much as those who do vote.

7. On Standing Up For Yourself

If you successfully wrote a paper in college, then chances are that you learned how to make and support a valid argument. Obama urged the college seniors in his audience to take those skills into the real world to foster a lively and participatory dialogue about real issues. "If somebody has a bad or offensive idea, prove it wrong," he said.

Ultimately, Obama's address pointed a finger right at Trump's wild campaign, but it also encouraged young professionals on how to look at life. "You'll have a boss that's not great, you won't always get everything you want, at least not as fast as you want it," Obama said. "So, you have to stick with it." If the current political landscape is any indication, Obama doesn't seem to believe that young voters are enthused or engaged in democracy — but his speech also shows that there's still time to turn that around.

More like this
What Is Barack Obama’s Net Worth? He Makes *Way* More Now As An Ex-President
By Hugh McIntyre
How To Support Gun Control Reform Right Now
By Morgan Brinlee and Carolyn Steber
The Very Best Quotes From Dr. Taylor Swift’s NYU Graduation Speech
By Grace Wehniainen
The Church Of Scotland Votes To Allow Same-Sex Marriages
By Sam Ramsden
Get Even More From Bustle — Sign Up For The Newsletter