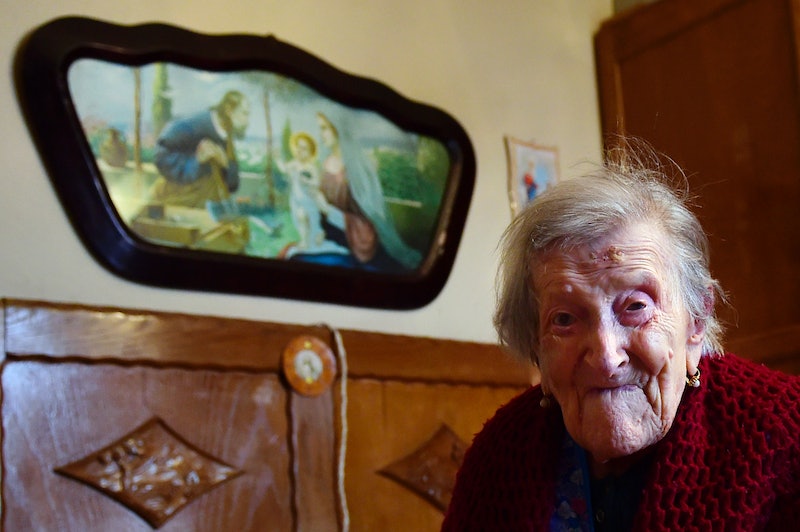 Today in amazing people you should know about, I bring you Emma Morano, the world's oldest person. She's 116 years old, hails from Italy, and as of this week, she is officially older than every other human on the planet. Incidentally, she also just so happens to be the only living person who was born in the 1800s — 1899, to be precise. See? Pretty incredible.

The context surrounding Morano's milestone is admittedly a bit sad — Susannah Mushatt Jones, a New York woman who was just a few months older than Morano and previously held the title of "world's oldest person," passed away on Thursday. Morano, who lives in Verbania, Italy, is still in "pretty good health," a relative Rosi Santoni told The Telegraph. "She does find walking very tiring, though, and she has a nap during the day," Santoni said.

Santoni also told The Telegraph that Morano was "very pleased" to hear news from her longtime physician Carlo Bava that she is currently the oldest person in the world. "She was told this morning and she said ‘My word, I’m as old as the hills,'" Santoni said.

According to the Independent, the centenarian credits her good health to a number of different factors. For one thing, Morano has been eating two raw eggs a day since she was 20 years old (a doctor at the time instructed her to do so to help overcome anemia). The other key to long life, according to Morano? Staying single. Last year, Morano told The New York Times that after her first marriage ended unhappily, she decided to live on her own. "I didn’t want to be dominated by anyone,” she said.

It seems like longevity is in Morano's genes. One of her sisters lived to be 102, and another one just short of 100. Obviously, with age comes attention. On her 116th birthday, Morano even received a signed blessing from Pope Francis. As of last year, Morano still lived alone in a two-room apartment. She will turn 117 in November.

Of course, there are many factors that contribute to long life, including genetics, but it seems to me that what Morano really has going for her is her amazing attitude. In a recent interview following her last birthday, Morano simply had this to say: "I am doing fine." Goals, am I right?

More like this
How To See The Lunar Eclipse On May 15-16, 2022
By Kaitlyn Wylde
How To Fight For Reproductive Rights, Based On How Much Time You Have
By Courtney Young
The Music Industry Continues To Fail Black Women
By Precious Adesina
Rihanna & A$AP Rocky’s Astrological Compatibility Proves They'll Be Amazing Parents
By Nina Kahn
Get Even More From Bustle — Sign Up For The Newsletter