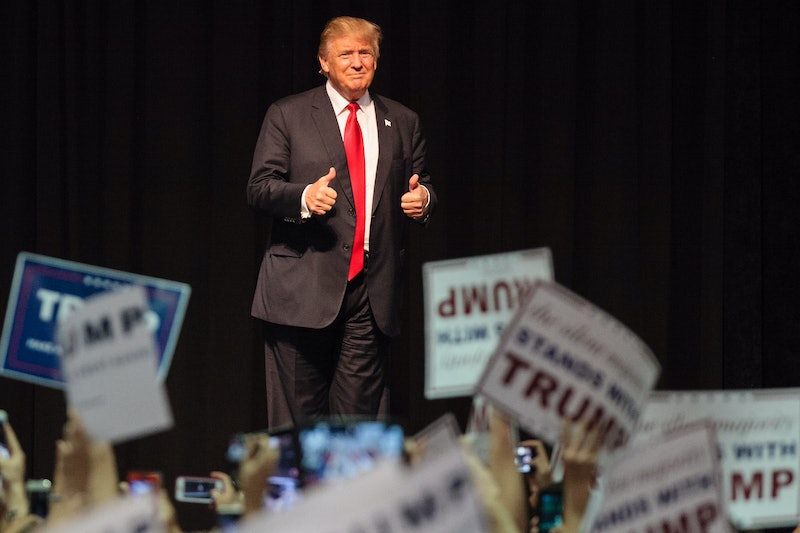 It is abundantly clear at this junction of reality television and politics in American culture that Donald Trump — the unlikely insurgent in this whole mess — has something to say about everything. From women's faces to racial and religious groups to acts of terror, there is nothing that escapes the censure or praise of The Donald. As far as terroristic acts are concerned, however, Trump has generally had some reprehensible and frankly embarrassing remarks on some of the most well-known acts of terror in recent history. In fact, most of Trump's responses to terrorism seem to assume a pattern: criticize the scenario or those involved, followed by an offer of zero solutions of his own — or, in rarer cases, an entirely unfeasible and nonsensical solution.

Trump's responses often cast blame on parties like President Obama, or entire religious groups, while failing to identify how or why any of these issues emerge in the first place. Offensive rhetoric and inflammatory hate speech are more often than not culprits for an angry public, whether members of these angered groups are representative of a majority or a minority group. The following are some examples of Trump's more objectionable responses to recent terroristic acts.

The terrorist attacks in Benghazi in 2012 where four Americans were killed at an American embassy elicited the usual pattern of responses from Mr. Trump. He accused The New York Times of a cover-up, and even further, has used this to advance his own presidential candidacy, saying, "We’ve let our rivals and challengers think they can get away with anything. ... If President Obama’s goal had been to weaken America, he could not have done a better job."

He even added the kicker — which he does, occasionally — that ISIS is using this opportunity to profit in the selling of oil: "And now ISIS is making millions of dollars a week selling Libyan oil. This will change when I am president."

Aside from his possibly-Freudian-but-definite-slip-up, accidentally calling the largest attack on American soil the name of a convenience store chain, Trump is known for remarks that he personally witnessed Muslim-Americans celebrating the infamous terrorist attacks on the other side of the Hudson River. He refused to take back those comments, though there is no evidence to confirm the allegations.

A Trump tweet reached viral popularity (and contempt) after the second series of terrorist attacks in Paris, which occurred in November 2015. This particular tweet, however, was actually written after the Charlie Hebdo attacks in January 2015.

This doesn't make it any less inappropriately-timed.

Trump also politicized the attacks across Paris in late 2015, saying that the events would have gone much differently had Parisians had possession of guns. He explained, "When you look at Paris — you know the toughest gun laws in the world, Paris — nobody had guns but the bad guys. Nobody had guns. Nobody. They were just shooting them one by one and then they broke in and had a big shootout and ultimately killed the terrorists."

He continued while at a rally in Beaumont, Texas: "You can say what you want, but if they had guns, if our people had guns, if they were allowed to carry, it would've been a much, much different situation."

How the attacks in Brussels back in March seemed like the appropriate opportunity for Trump to call for closing the U.S. border with Mexico is, in itself, a conundrum. Additionally, in an interview with NBC, he added that Belgian authorities should "do what they have to do" to get information from the suspects. Note, these were still suspects, not convicted criminals. He further explained, "If they could expand the laws, I would do a lot more than waterboarding. You have to get the information from these people. And we have to be smart. And we have to be tough. We can't be soft and weak."

Sure, acquisition of intelligence is key, but breaking international human rights treaties to do so — which the U.S. has already done before? That's not cool.

On a semi-related note, he also called for closing of U.S. borders to Muslims, as well as patrolling of Muslim neighborhoods to prevent radicalization.

Interestingly, Trump condemned the attack on the Colorado Planned Parenthood clinic back in November 2015, calling the incident "terrible" and the shooter a "maniac." This is less burly than his usual response to terror, and actually quite non-confrontational. Unfortunately, he also called for the defunding of Planned Parenthood and later said there "has to be some form of punishment" for women who have abortions if the procedure is made illegal.

In all fairness, Trump's views on abortion have teetered, if not strayed entirely from previous sentiments in each subsequent statement he has since made.

Curiously, Trump has openly shown support for conspiracy theorists, such as Alex Jones of InfoWars, who believes 9/11, the Sandy Hook shooting, and the Oklahoma City bombing were inside jobs by the U.S. government. Whether or not Trump subscribes to these beliefs is another story, though he did tell Jones, "Your reputation's amazing. I will not let you down." It's still unclear what he meant by that.

In this instance, Trump talks big, but offers no sensible or solid solutions to future threats except that, "You don't want to hear how I'd handle it. I would get myself in so much trouble with them, we are going to handle it so tough. And you know what we're going to do? We're going to get it stopped."

He was referring to terrorism, of course, but offers no specifics to defend his statements. He referred to the fact that neighbors did not report the couple's suspicious behavior a result of a fear of "racial profiling." He continued, "We have become so politically correct that we don't know what the hell we're doing."

No matter how tragic or severe the occasion, Donald Trump seems to have an ill-timed remark to drive attention to his own cause. The question is whether or not this tactic — these comments without discretion or effort at resolution — will drive more politically-disillusioned voters toward or away from him.