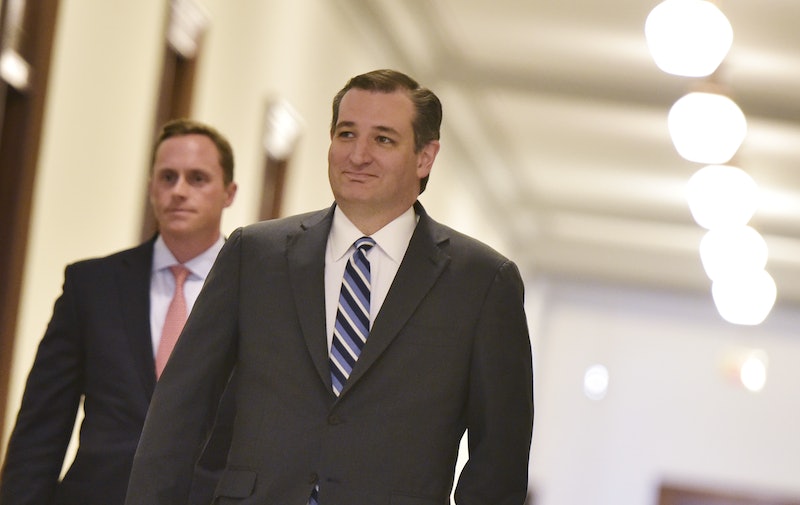 Conservatives who oppose Donald Trump are still looking for a third-party conservative candidate to run in the fall, and the pickings are slim. In addition to Mitt Romney and Ben Sasse, one name that frequently comes up for a possible third-party candidate is Ted Cruz. Is it possible that, having lost the Republican nomination, will Cruz run a third-party campaign in November? Probably not, but it’s understandable that his name keeps getting floated.

Whatever else you might say about Cruz, his conservative bona fides are rock-solid. He obviously wants to be president, and because he ran this cycle, already has an existing campaign infrastructure that he could conceivably restart for a third-party bid.

Despite all of this, there’s one big reason to suspect that the defeated presidential candidate will not be throwing his hat in the ring for a second time in 2016: Cruz has already filed the paperwork to run for reelection to the Senate in 2018. That doesn’t obligate him to anything, of course, but it does suggest that a third-party run isn’t his first priority right now. Cruz has also said that he has “no interest” in running again this cycle, although lacking interest in something isn’t the same as ruling it out entirely.

This does not mean, however, that Cruz is going to fulfill his campaign promise of endorsing the Republican party’s presidential nominee. On May 14, the Texas senator gave his first speech since dropping out of the presidential race earlier in the month, and he didn’t use it to endorse Trump. Cruz didn’t even mention Trump, the presumptive nominee, by name, nor the fact that the GOP is undergoing a civil war of historic proportions.

Instead, Cruz focused on the issue of transgender bathroom access, accusing the Obama administration of “politically correct lunacy” for ordering schools to let trans students use the bathrooms that correspond with their gender identity. His only mention of the presidential race was a brief remark that “we need a president who will have your back.”

It’s not impossible that conservative activists could succeed in convincing Cruz to run again. After all, stranger things have happened in politics this year. It does seem unlikely, though, and that leaves the #NeverTrump crowd with precious few options for an alternative candidate. Attempts to draft Sasse, one of the leading Trump critics in the GOP, have so far been unsuccessful, and while Romney is playing a central role in the effort to draft a third-party canidate, he’s also said that he won’t run himself.

It makes sense that Cruz is such an appealing option for anti-Trump conservatives. But an independent Cruz run, while not entirely impossible, probably isn’t in the cards.