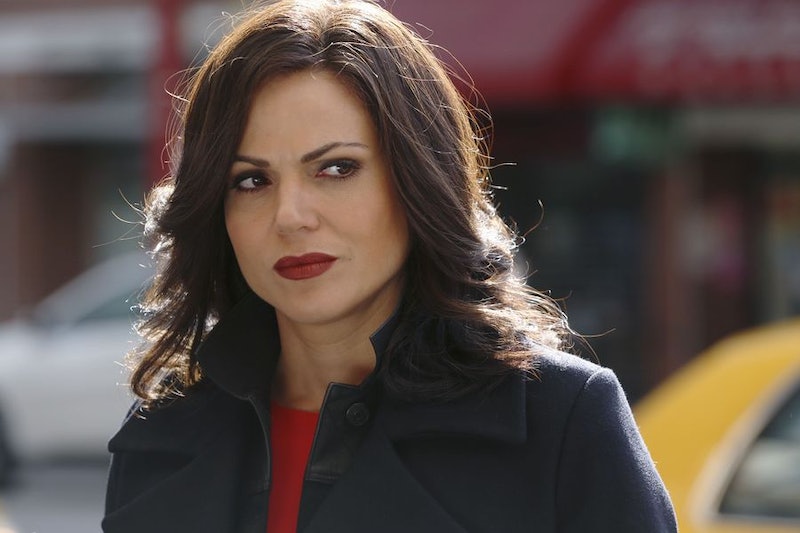 Whether you consider yourself a fan of Once Upon A Time 's former Evil Queen or not (and if not, how dare you?), I doubt there was a dry eye in any Sunday night ABC-watching household last Sunday night when Regina watched Robin Hood die by Hades hand right in front of her eyes. Sure, Robin's barely been on screen this season other than to look on helplessly while everyone else actually did stuff and to hand over his baby to the woman who impersonated his dead wife to get herself pregnant with his child, but I'm NOT here for Regina losing yet again. Neither is she, which is why she decided to rid herself of her former dark persona once and for all in the season finale. Of course, things are a bit more complicated than that.

When Dr. Jekyll hopped through a magic wishing well portal into the Land Without Magic (which apparently does have magic after all), he left behind Mr. Hyde but brought with him a serum that separated the two men into two different people. Since Regina was experiencing some serious guilt over her past actions as the Evil Queen and felt she was pretty much doomed to a life of suffering because of it, Snow gave her the leftover option so she could rip out the EQ and kill her once and for all. In fact, she did exactly that, crushing the Evil Queen's heart and committing herself to a better life moving forward... or so it seemed.

Once everyone returned to Storybrooke and Regina untethered the town's magic from Hades' crystal wand, Mr. Hyde somehow appeared, laying claim to the place and threatening Regina. But that's neither here nor there. What's more important is that the flow of magic somehow took the dust of the Evil Queen's heart (still left on that New York City rooftop, it seems) and brought it straight to the Dragon, where it rearranged itself and basically brought the Evil Queen back to life. Remember that whole rule about how death is irreversible and you can never come back? Well, we already broke that rule with Hook, so why not say to hell with it and do it all over again?

This raises a pretty significant problem, however. The Evil Queen was absolutely formidable back in the Enchanted Forest, and was deranged enough to dark curse that required her to crush her own father's heart. While Regina has certainly evolved past those days, the Evil Queen certainly hasn't, and something tells me she's not going to take too kindly to having her better self try and snuff her out. As she warned at the end of the finale, this is war, and it's bound to get pretty messy.

While I don't for one second think the EQ will prevail in the end — my money will always be not only on Regina as she is now, but in her family who will fight right alongside her — I certainly wouldn't want to come face to face with Her Majesty. In fact, I'm more concerned about what havoc she may wreak than I am about Dr. Hyde and his baseless attempts at a takeover. If there's anything I'm looking forward to about Season 6, it's seeing two Reginas battle it out. I'm sure of who will win, but that doesn't mean the fight won't be incredibly satisfying to watch, especially given Lana Parrilla's incredible chops. It's too bad we've got a long summer ahead of us until that'll happen!