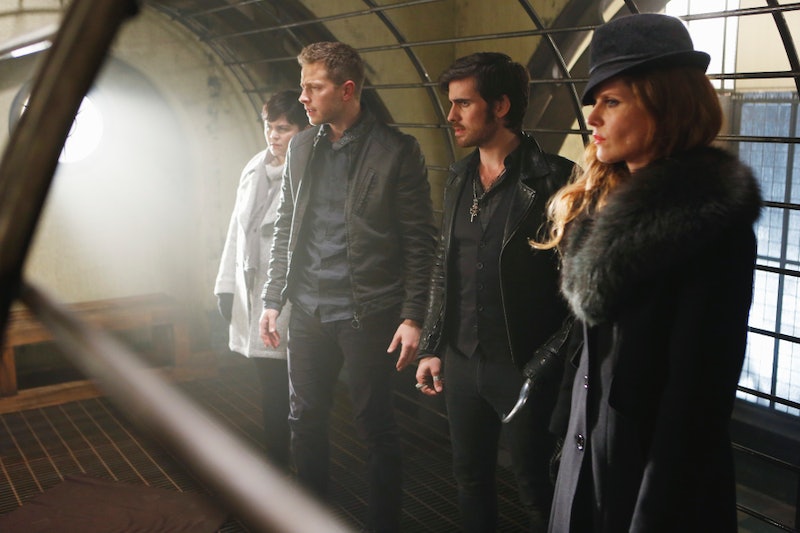 It's hard to believe that Once Upon A Time Season 5 has finally come to a close, but here we are. The two-hour season finale has come and gone, leaving a whole lot of uncertainty and a new villain (or two!) behind. When Zelena created a portal to send back all the errant background actors/Storybrooke residents to whence they came before Henry could destroy magic and zap them from existence, the stupid thing wouldn't close again and instead it sucked Snow, Charming, Hook and Zelena through to an unknown land, where they were pretty much immediately imprisoned and one of our new villains tried to choke Hook out. Turns out, that was Mr. Hyde who soon found a way to literally rip the noticeably less nefarious Jekyll from his body and give him his own form.

I'm getting a little ahead of myself, of course. At first, it wasn't clear whether Jekyll and Hyde were even aware of one another's existence, but no matter. The switch between the two happened via a potion — one that was administered by a nameless lab assistant with somewhat inexplicable motivations (seriously, what does he get out of the deal?). When Dr. Jekyll agreed to help the Charmings, Hook and Zelena get back to Storybrooke by fixing Zelena's broken wand so long as they agree to take him with them when they go, the assistant caught him and immediately turned him back into Mr. Hyde, who decided to let the crew get back to Maine, so long as he could hitch a ride. Hyde also stole the box containing Belle, still under a sleeping curse, from Rumple in another realm. How? Why? It doesn't matter! Just go with it!

You should also probably just go with the fact that while Henry succeeded in destroying magic, he also managed to bring it back by getting a bunch of people to throw pennies in a wishing well. That action also managed to create a portal to pull everyone back from the other land. The only problem? Jekyll came with, but Hyde was left behind... and Gold went through the portal to join him. That much evil combined is some seriously bad news.

By the end of the episode, Hyde managed to find his way to Storybrooke, where he's now decided to take up residence. Not only that, but he's told Regina to start packing up her desk at City Hall, because the town is his now. That obviously didn't go over too well, but given that Hyde has Gold on his side, something tells me things are going to get very messy indeed come next season.

Of course, it's not particularly clear what Hyde's motives actually are, and every good villain needs a motive. For his part, Gold is desperate to wake Belle from her sleeping curse (which, like, how does pregnancy work when you're not only unconscious, but shrunken small enough to fit inside a small trinket box?), but Hyde just seems to want to be evil for the sake of it. Perhaps that's what makes him so dangerous — he's got nothing to lose, so what's to keep him from destroying absolutely everything? I guess that's something we won't find out until Season 6.