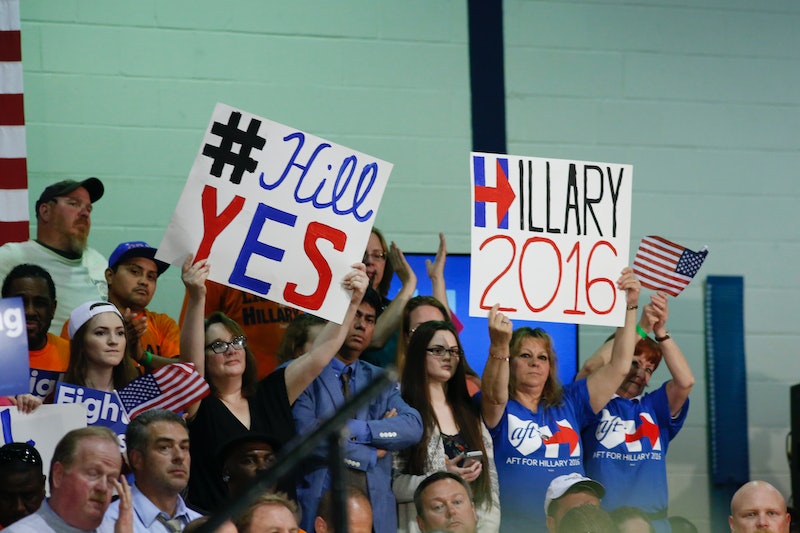 There will be approximately one billion polls conducted in the presidential race between now and November, and you can bet every one of them will get their time in the Sun. But of course, national polls aren’t how America picks its presidents; that would be the electoral college. And as it happens, one candidate has a lot more “safe” electoral votes than the other. Which candidate does the electoral college favor? The answer is Hillary Clinton. While forecasters disagree on the extent of her advantage, they do not disagree that she has it.

But let’s back up a bit and look at exactly what we mean by this. The electoral college is very similar to the parties' delegate systems. Each state gets a certain number of electoral votes based on its population, and those votes are awarded to candidates on a winner-take-all basis* according to the statewide vote. What’s important to keep in mind, though, is that most states in the U.S. consistently vote either Democratic or Republican, regardless of the nominees and their campaigns. This means each candidate can rely on winning a certain minimum number of electoral votes right off the bat, regardless of what happens, and unless it's a truly anomalous cycle, they won’t be disappointed.

So how many electoral votes do Clinton and Trump each start off with? That’s what forecasters can’t quite agree on yet. There’s disagreement over which states should be considered toss-ups, and by how much. Every forecast, though, gives Clinton a heavy advantage over Trump.

The Rothenberg & Gonzales Political Report, another highly respected forecaster, concluded that Clinton has 263 electoral votes locked down — just seven short of the 270 needed to become president — while Trump has 206. That leaves just 69 electoral votes in the “toss-up” category.

Meanwhile, the University of Virginia’s Larry Sabato doesn’t even think there are any toss-up states. He gives Clinton a staggering 347 electoral votes right off the bat to Trump’s 191, which would guarantee her the presidency.

Of course, as with everything in politics, none of this is absolutely 100 percent certain. Electoral blowouts do happen from time to time, and sometimes candidates lose states they were sure they would win. By and large, though, the nature of both our electoral system and the two party’s geographic strengths heavily favor one candidate to win the presidency even before the general election campaign begins. And that candidate is Clinton.

*There are two exceptions to this: Nebraska and Maine, both of which distribute electoral votes on a semi-proportional basis.