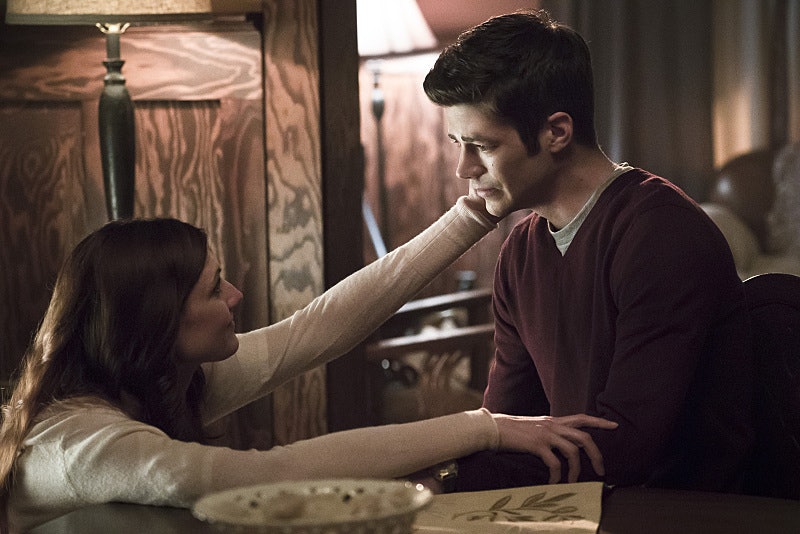 Characters on The CW's hit The Flash have been talking about a certain force so much lately, you might get confused about which sci-fi property you're watching. But the mysterious resource that makes Barry Allen a speedster isn't the dark or light sides of the Force from the Star Wars universe. The Flash's powers come from the Speed Force, and a lot of this season of the show has revolved around S.T.A.R. Labs trying to understand it. In the May 10 episode "The Runaway Dinosaur," Barry actually conversed with the Speed Force, adding another layer of depth to the concept. How does the Speed Force work and what does mastery of it mean for Barry and other metahuman speedsters?

The Flash series didn't invent the notion of a force that Barry and others like him tap into when they exercise their powers. The Speed Force is a big topic of conversation in the DC comics version of The Flash as well. In the comics, the Speed Force is a subject of expertise on the planet Savoth. The Flash TV show has enough trouble on its hands with Earth-1 and Earth-2, so it hasn't extended its reach out into space yet. If The CW's Barry Allen did ever make it to Savoth, he'd probably be amazed at what he could learn about the source of his abilities there. Scientists and entire universities study the Speed Force on Savoth; a tool that one particular academic built to focus and deploy the Speed Force as a weapon had the side effect of summoning Earth's Flash Jay Garrick to the planet. Whoops.

But Savoth didn't invent or create the Speed Force. In the comics, the Speed Force isn't just something Barry has, it's something he produces as he runs that can then be tapped into by others. "The Runaway Dinosaur" episode used another canon property of the Speed Force to set up some emotional moments between a lost Barry and various members of his family, living and dead. Though they looked like Iris, his mother, Joe, and his father, the conduits were up front with Barry that they were really just messengers selected to put him at ease. There's a precedent for the Speed Force being sentient in the comics, where it is sometimes regarded as a consciousness or a separate plane.

Barry's trip to the Speed Force mimicked other near-death experiences depicted in pop culture. And that may have been intentional, since that plane might be where speedsters go when they die. That idea comes up in the comics after a trio of speedsters including Jay Garrick and Wally West try to send villain Superboy Prime there. They're aided in their efforts when Barry, Jesse Quick, and fellow speedster Max Mercury — all deceased by that point — appear from the Speed Force realm to pull him in.

The Speed Force is an enigmatic concept with a DC history of varying interpretations. The CW's The Flash has made it clear that however powerful and universal the Speed Force is, right now, it's definitely on Barry Allen's side.