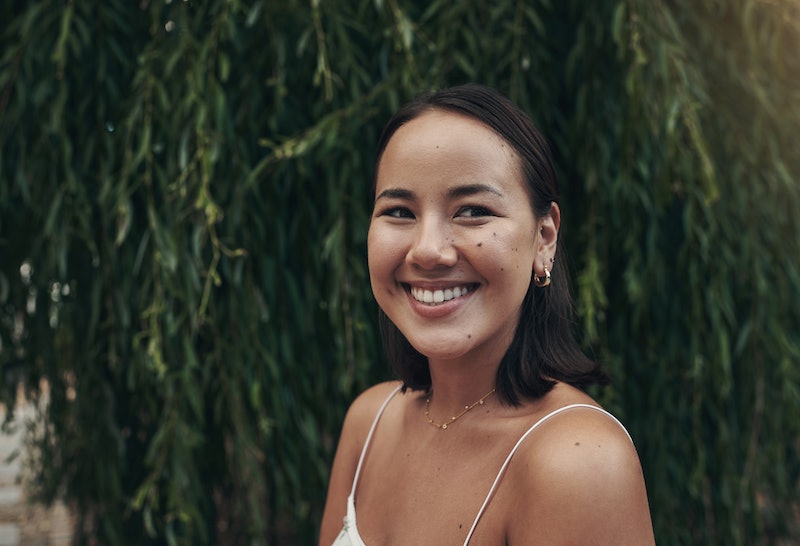 The 20s are an exciting time for many women: we often spend this decade exploring new careers, starting new romantic and platonic relationships, continuing our educations, and enjoying the final time in our lives when we possess the ability to eat a ton of French fries in a single sitting without getting a serious stomachache later in the day. But as you're going through the emotional highs and lows of your third decade, your body is also shifting and changing. Some people believe that "adulthood" is a pretty fixed physical state until something like pregnancy comes along to disrupt it; but it turns out that you don't magically settle into your "adult body" at 18 and then stay exactly there for the next 20 years. Rather, your 20s are an active time for biological development, and you'll like experiences all sorts of developments and changes in your body during that decade, from your bones to your brain, your metabolism to your genitals. It's all go go go.

We're still learning a lot about the female body's development in its third decade. But as we examine the changes that happen to the 20-something body, it's important not to let ageism creep into the mix. Yes, most of our bodies are operating at high-performances levels during our 20s, but that doesn't mean they're "better" than bodies that are different ages. Young bodies are designed to be generally high-functioning in our 20s because Nature would like us to reproduce during this time period; it has nothing to do with being better, smarter, or even healthier than people in different life phases.

So here are six ways in which your delightful, powerful body changes itself during its third decade on the Earth. How amazing is this? Raise a glass of milk in its honor (got to keep those bones strong, guys).

The concept of a fully "developed" brain is actually the cause of quite a lot of argument in neuroscience. At what age can a brain be considered full-grown? For ages, scientists thought that late adolescence was the period in which brain growth ended, but more recent research has shown that to be incorrect. As it turns out, there are still new developments in your cranium in your 20s, with one part in particular experiencing a flood of growth and change during this time period: the prefrontal cortex, which is partially responsible for decision-making, judgements, risk-taking and short-term memory. (So if you're in your early 20s but still making the same stupid decisions you were making in your teens, your prefrontal cortex may be to blame.)

A 2011 study found that the brains of people in their mid-twenties were continuing to forge new connections in the frontal lobe in particular. But the breadth of change that the brain is undergoing in your third decade is actually pretty intense: along with creating new connections between neurons, your brain is also insulating nerve fibers and "pruning" synapses that make the brain work less efficiently. According to a Harvard study released earlier this year, you're also possibly undergoing the first period of horrible stress in your life in your 20s, and that may alter the ways in which your brain develops.

The brain development we experience in our 20s may also offer a partial explanation for the tendency for mental disorders to emerge in late adolescence and the early 20s, as the brain grows and shifts in potentially damaging ways during this time period.

The most profound change that many women in their 20s experience with their menstrual cycle is that it may become more regulated. The hormonal flux of adolescence means that, for many girls, their periods are all over the place for their first few menstruating years. But in the 20s, hormone levels begin to become more regular, and many women find that their cycle settles into a predictable course. This isn't the case for everybody, though — so don't freak out if yours is still jumping around the calendar like a kangaroo.

The other (and far less welcome) potential development is the onset of cramps. It's now recognized among gynecologists that the 20s might be the age when cramps really start to bite. An expert consulted by Shape explained that the body's high production of prostaglandins, a hormone-like substance associated with inflammation and pain, during the 20s are likely to blame for it; prostaglandin prompts uterine contractions, creating the cramping sensation.

The 20s represent the point at which women reach peak bone mass — the time in their lives when their bones are at maximum natural density and strength. Bones are constantly producing new cells and losing old ones, particularly as you grow, and that process hits its most productive period in the 20s, where you have the densest bones you'll ever possess. A 1995 study found that the average age of peak bone mass among women is about 22.5, plus or minus a year. For others it may be later, but after the peak bone mass point is reached, things don't get better for your bones; they begin the process of slow degradation that happens as you age. This may actually begin in your 20s, so it's never too early to start getting that calcium.

While collagen levels (which cause suppleness and softness in skin) are at their peak in the 20s, there's another skin-related change that occurs at this time that may surprise you: the rise of adult acne. Even if women had no acne experience at all in their adolescence, they may develop spots in their third decade, technically long after they should have been through the "danger period."

A 2012 review by the American Academy of Dermatology found that the culprit behind this sudden skin-change was fluctuating hormone levels. While hormones may be settling down gradually, their shifts may still cause consequences for pimples; the 20s are, for some women, a prime time for excess production of sebum, the pore-clogging oil, as well as a time when skin cells accumulate on the skin rather than shedding properly. Both are known zit-causers, and pimples are likely to coincide with the beginnings of the menstrual cycle.

The 20s are a key time for muscle building and fat accumulation in specific parts of the body. Fat, or adipose tissue, begins to shift around in the 20s, in a gradual process that will last decades.

So where does it go? A 1999 study of Japanese women in their 20s provided a few clues. Subcutaneous (i.e. under-skin) fat disappears slowly from the cheeks, neck, boobs and lower legs, and begins to build up at the waist, the infragluteal region (underneath the butt), and on the abdomen. The researchers, looking at women at the end of their twenties compared to the beginning, found that weight had shifted around in three different patterns that were distinct from the ways that it was distributed around the body in the early 20s.

The 20s are often a period of great health for your genitals; for many women, the only genital-related health problems they experience during this period are STDs, which are a higher risk in this decade because of the increased likelihood that you'll be intimate with a partner or partners. More than half of the new STD infections every year in the US are in 15-to-24 year olds, according to the Center for Disease Control And Prevention.

You may, however, notice something interesting happening to your labia majora, the large lips on the outside of your vulva: they may appear to "shrink" or start to slim down. No, they aren't rebelling or disappearing; this is a natural part of aging, and is simply part of the loss of the subcutaneous fat we were discussing earlier. Plumpness in the vulva is not actually a necessary thing for childbearing, orgasms or anything of note, so it's not anything to panic about.

None of these bodily changes are anything to get nervous or freaked out about; they're just proof that our bodies are always changing (even during times in our lives when we thought that they didn't).