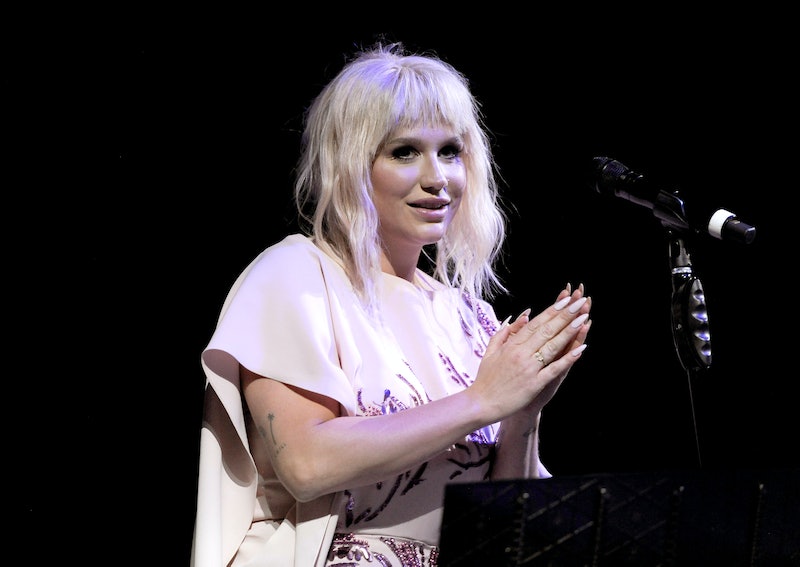 I don't think there's anyone on this planet who could argue that Kesha hasn't been through a lot lately. Between her legal battle with Dr. Luke and not releasing new music because of it, she's definitely had a lot on her plate, and it seems like those of us watching what happens from the outside don't know the half of it. On Sunday, Kesha updated fans on Instagram, and her messages were nothing short of inspiring. Through a series of photos from her personal collection, Kesha announced that she's taking her life back and let everyone in on what she's been dealing with while her courtroom saga has been making headlines.

Anyone in Kesha's position would be struggling, and in her own words, the singer explains that for a long time she's been in a really difficult place. In one of the photos captions, she says she's been dealing with depression and an eating disorder — something she's also tackled in the past — and calls the phase of life she's in right now an "uphill fight." But now, she wants to make the choice to fight on despite all that she's been through, and it's awesome to hear that she's reclaiming her life this way.

I have been battling depression and an eating disorder for a while now. my career is in a strange place and it feels like I'm fighting an uphill fight some days. but I have decided to take my life back. my freedom. my happiness. my voice. my worth. I will not just f*cking be quiet and hide. today I will say f*ck it and live. So F*CK it. today I'm making that choice. AND IM HAPPY AS A DAMN CLAM. and also a big ol f*ck u if u wanna hate on my body. just remember that makes u look like a d*ckhead.

Some of the photos are topless selfies while some of them are just photos of the beach, but it looks like Kesha is finally finding the peace she's deserved for such a long time. And it seems she was so inspired by the sea that she even got a new, tiny tattoo of a shark.

Back in April, judge Shirley Werner Kornreich rejected Kesha's appeal of her earlier decision against allowing the singer to break her recording contract with Sony. Later, Kesha claimed that she was offered freedom if she agreed to apologize to Dr. Luke, but obviously she did not take that this alleged offer. Since then, though, it seems like she truly has taken her life back into her own hands. Last month, she even released a song, "True Colors," with Zedd. According to TMZ, she also reportedly plans to make a statement against Dr. Luke during a performance at the 2016 Billboard Music Awards, but we won't know if that's truly in the works until the awards air May 22.

But no matter what she plans to do from here, it's great to see that she's taking such a positive approach to what has to be a heartbreaking situation. Through all of this, Kesha has definitely proven she's a fighter, and I have a feeling her Instagram posts are just the beginning of what's to come for her.

More like this
The 1st Photo Of Priyanka & Nick's' Baby Comes After 100 Days In The Hospital
By Jake Viswanath and Hugh McIntyre
Spice Girls’ Net Worth: The Richest Member Is Wealthier Than The Rest Combined
By Hugh McIntyre
Lisa Marie Presley Reviewed Baz Luhrmann’s ‘Elvis’ Movie On Twitter
By Grace Wehniainen
Selena Gomez Joked About Her Relationship Status In Her ‘SNL’ Monologue
By Grace Wehniainen
Get Even More From Bustle — Sign Up For The Newsletter