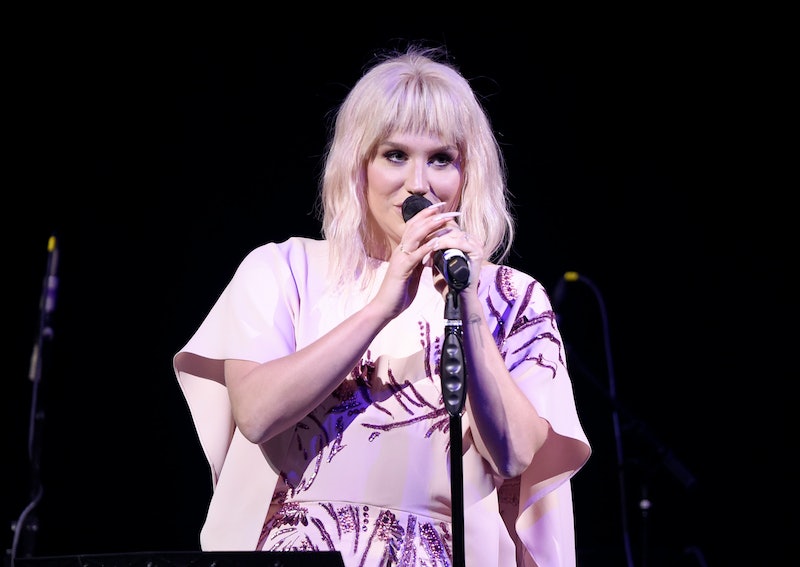 If this report is true, the 2016 Billboard Music Awards will be an emotional night. According to TMZ, Kesha will reference Dr. Luke at the Billboard Music Awards with a "statement performance" that addresses her legal battle against the producer. TMZ reported that at the May 22 awards show in Las Vegas, Kesha's performance "might even include images" of Dr. Luke, real name Lukasz Gottwald. Kesha has not confirmed this performance and Bustle's request for comment on the report has not been returned. However, if the report is true, it would be a step in a new direction for the singer, who only recently released new music with Zedd's "True Colors" cover. This potential performance would undoubtedly make a huge statement.

While she hasn't confirmed anything, Kesha did share the following tweet hours before reports of her Billboard Music Awards performance began to surface: "You can't start the next chapter of your life if you keep re-reading the last one." It's been nearly two years since Kesha accused her longtime producer of assaulting her sexually, verbally, and physically. Dr. Luke has repeatedly denied these allegations, telling Rolling Stone in a statement: "The Court repeatedly stated Kesha is already free to record without Dr. Luke, and that she had not presented any facts supporting her claims. That's because all the evidence — including Kesha's own videotaped sworn testimony — show her allegations are false." He has also countersued Kesha for defamation.

Until recently, Kesha has kept her battle with Dr. Luke a legal one, as she chose to stay relatively quiet about the accusations outside of the courts. But, after a February ruling by the Manhattan Supreme Court in New York City denied the singer's request to be released from her current contract with Sony, Kesha has been more open with the public. Earlier this month, Kesha shared a selfie that claimed in its caption that she "got offered her freedom" if she was willing to lie.

"I would have to APOLOGIZE publicly and say that I never got raped," she alleged. "THIS IS WHAT HAPPENS behind closed doors. I will not take back the TRUTH. I would rather let the truth ruin my career than lie for a monster ever again." Previously, in February, Sony representative and attorney Scott A. Edelman told The New York Times, "Sony has made it possible for Kesha to record without any connection, involvement or interaction with Luke whatsoever, but Sony is not in a position to terminate the contractual relationship between Luke and Kesha." And on April 4, in direct response to Kesha's Instagram post, Dr. Luke's attorney, Jim Bates, released a statement:

"Kesha’s Instagram posting is false. The Court repeatedly stated Kesha is already free to record without Dr. Luke, and that she had not presented any facts supporting her claims... The only thing Kesha is not free to do is to continue to lie about Dr. Luke through publicity stunts and outrageous smears, ignoring the fact that by her own free will she went to work and entered new contracts with Dr. Luke years after this 'incident' supposedly happened. Her goal all along has been solely personal enrichment by seeking to break contracts that brought her success and millions so she can enter into more lucrative ones. We look forward to our day in court holding Kesha accountable for her lies."

Kesha giving a "statement performance" at the Billboard Music Awards would express that she is not interested in holding back anymore. Despite the court ruling against her, the performance would mean that she does not plan to stop her fight. She doesn't seem to care if Dr. Luke denies her allegations, and has made it clear that she wants fans to know her perspective on the situation, but that she's also starting a new chapter of her life.

This point became clear from her most recent performance of Lady Gaga's "Til It Happens To You" (a song that has been used as an anthem for sexual assault survivors) at the Humane Society Gala. Kesha started her emotional performance with a message that didn't need to be explained: "I want to dedicate this song to every man, woman, child [and] animal that has ever been abused." In raising awareness those survivors even with something as simple as a performance, Kesha made the issue about something bigger than herself.

There's no word yet on what song she would perform at the Billboard Music Awards, but, to be honest, it doesn't really matter. Just by performing at such a public event, this "statement" would be Kesha's step forward. It's her chance to reassert her agency in this increasingly complex story.