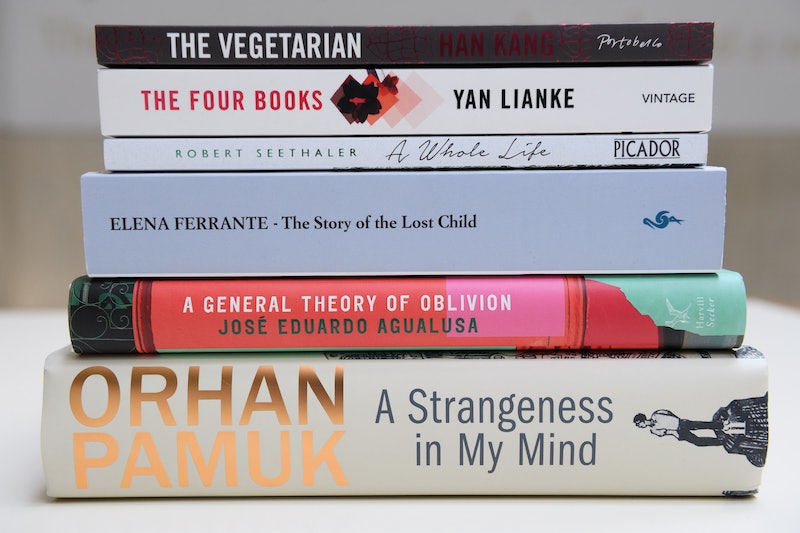 Attention fellow book lovers! The Man Booker International prize winner for works in translation is going to be announced Monday evening, so it's time to make some room in your To Be Read list. Which is exciting for more reasons than one.

The Man Booker Prize has been around for more than 40 years, and has become probably the most distinguished literary prize for books written in English. Starting in 2005, the Man Booker International prize was awarded every two years to an author writing in any language for a body of work that was also available in English. But beginning this year, the award has been overhauled. Starting in 2016, the Man Booker International prize is now awarded to a single title originally published in non-English and translated into English. The prize money — 50,000 pounds — will be split equally between the author and translator. Basically, it's now just like the regular Man Booker, except for works in translation, rather than books written originally in English.

There are six books on the shortlist for the prize: A General Theory of Oblivion by José Eduardo Agualusa from Angola (Daniel Hahn, translator); The Story of the Lost Child by Elena Ferrante from Italy (Ann Goldstein, translator); The Vegetarian by Han King from South Korea (Deborah Smith, translator); A Strangeness in My Mind by Orhan Pamuk from Turkey (Ekin Oklap, translator); A Whole Life by Robert Seethaler from Austria (Charlotte Collins, translator); and The Four Books by Yan Lianke from China (Carlos Rojas, translator). So really, no matter who wins, you have more books you need to add to your self already.

This new Man Booker focus on translated works is exciting, and not just for authors and translators. Translated works have never been particularly popular for English-speaking audiences, and they make up only a small number of books published in English each year. Here in the U.S., for instance, works in translation make up only 3 percent of the book market. And of those published, few ever get much press or publicity, meaning that even if you want to make an effort to read more broadly, it can be hard to find books you might like, or know which titles to start with.

So while the Man Booker International prize won't necessarily fix that entirely, it should give us all some new works and authors to check out. Starting now!