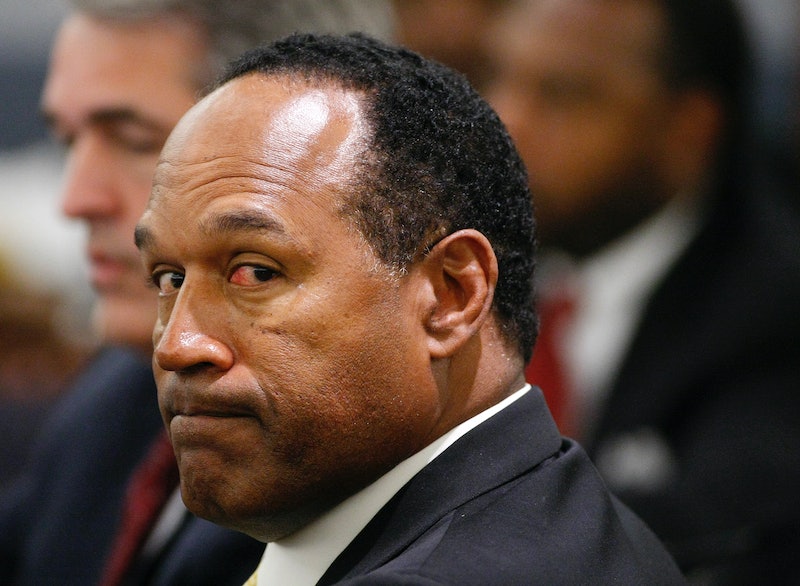 The trial of the 20th Century occurred in 1994 when O.J. Simpson — NFL star, movie star, and a man whom many considered to be an All-American hero — was charged with the murder of his ex-wife, Nicole Brown Simpson, and her friend, Ronald Goldman. Now, 22 years later, there is a renewed interest in the trial across pop culture. First came the smash hit FX miniseries, The People v. O.J. Simpson: American Crime Story, and now the ESPN films documentary, O.J.: Made in America. But where and how can you watch O.J.: Made in America ?

Some have actually already seen the sprawling 7.5-hour documentary — in theaters. The film appeared at both the Tribeca Film Festival and the Sundance Film Festival earlier this year, so a number of film buffs had the chance to check it out. But what about everyone else? Well, in order to be eligible for Oscar consideration, the film has to have some kind of run in regular movie theaters — and it's going to do just that. While the exact dates and theaters have not yet been announced, the film will see a limited run in a small selection of theaters in New York and Los Angeles only, according to the Los Angeles Times, and this will occur sometime before the series premieres on television on June 11. And if you don't happen to live in one of those two cities?

Well, then you'll be able to watch the doc on TV. The television version is ten hours long including commercials, and will be split into five two-hour episodes. According to Variety, the first episode will premiere on ABC on Saturday, June 11, at 9 p.m. ET/PT. After that, the series moves to ESPN, with a repeat of the premiere airing on the sports network at 7 p.m. on June 14 followed by episode two at 9 p.m. Episode three hits ESPN the following night, June 15, at 9 p.m., episode four on June 17 at 9 p.m., and the final episode will air on ESPN on Saturday, June 18, at 9 p.m.

As far as streaming the documentary goes, it's not yet clear what your options will be. Hulu does air ABC content, so there's a chance that the premiere could find its way to the streaming service, but the ESPN-only episodes are unlikely to get the same treatment. The doc does seem likely to end up on iTunes, however. Other documentaries from ESPN's "30 For 30" documentary brand are readily available for purchase from the online store, including their earlier foray into the Simpson trial, June 17th, 1994.

O.J.: Made in America promises to be a different type of O.J. Simpson feature, since it is more about his entire life and the country's relationship with him rather than just his infamous trial. The first two episodes of the documentary chronicle his early life and career, his ascension to fame and the nation's love affair with him, and his marriage. Episodes 3 and 4 deal with the murder trial, and the finale details the two decades of his life that have passed since his acquittal, including the ordeal of how he ended up serving his current prison sentence.

The film is garnering rave reviews so far, so it makes sense that a lot of people are going to want to see it. And thanks to the multiple ways it's being offered to the public, it certainly looks like many people will get their chance to do just that.

More like this
The True Story Of Candy Montgomery From Hulu’s True Crime Series
By Radhika Menon
Where Is Dr. Cline Now?
By Morgan Leigh Davies
All The Theories About Kathleen Peterson’s Death
By Morgan Leigh Davies
ITV’s 'Grace' Will Likely Return for A Third Season — & Many More After That
By El Hunt
Get Even More From Bustle — Sign Up For The Newsletter