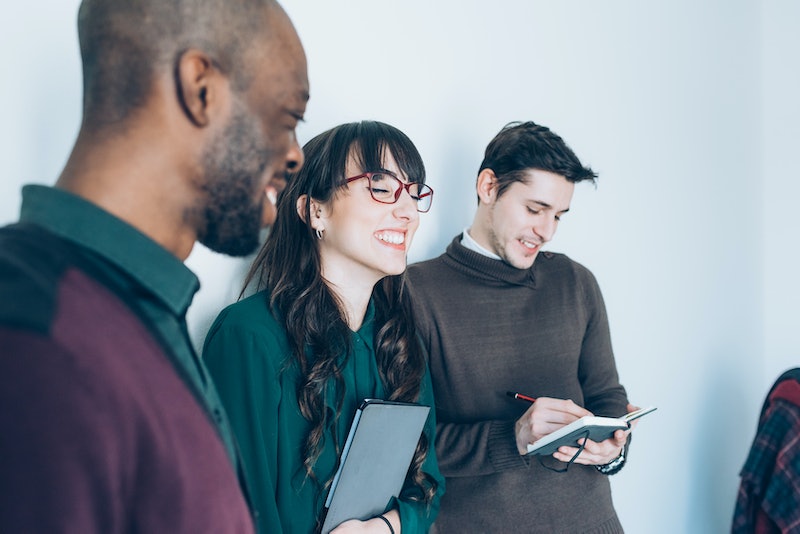 It has become apparent that there is a clear divide when it comes to the Millennial generation. There are older Millennials, who may identify more closely with Gen X; and then there are younger Millennials, the youngest of whom are considered digital natives. To be fair, I kind of straddle the line as an early '90s baby — but I'm willing to bet that these questions younger Millennials have for older Millennials have occurred to most of us who were born after 1989. Especially those of us who did not have cool older siblings. Most of us were around 8 years old when Y2K happened, and fair warning, I'm going to be posing some hard-hitting queries about being tweens and teens in the '90s, folks. Please answer honestly.

I remember when I was 21 at my first job, and a 30-year-old co-worker referred to us jointly as "Millennials." The statement seemed a little weird to me; she was decidedly grownup, and came at things with such a different set of cultural touchstones, but technically, she was right. Kind of. According to Pew Research, Millennials are defined as people who were between the ages of 18 and 34 in 2015. We're the world's largest living population, and we're very, um, polarizing.

There are an uncountable number of think pieces about how great Millennials are, how awful Millennials are, how we're saving the world, how we're driving the Earth into true, unending oblivion — there's an intense pressure to self-identify, to Take A Stand pro- or anti-Millennial. But sometimes, like, I just want to know what the older kids thought of the Spice Girls — so those are the questions I'm going to ask today. Thoughts, older Millennials?

1. Were the Spice Girls actually cool, or was I just a 6-year-old teeny bopper ?

Because we definitely played Spice Girls on the playground in second grade as a way to seem cooler and older, and by "played Spice Girls," I mean we assigned each other Spice Girl roles based on our social rankings. Kids, am I right?

2. What about Beanie Babies?

They just looked like stuffed animals to me, and I'm pretty sure I ripped those little heart tags off all of mine. Was I not supposed to do that?

3. Were you a combat boots or platform sneaks kind of '90s human?

Or were you neither of these things? If there were other things, what were they? Because I was a "velvet overalls with butterfly appliques and matching purple clogs" kind of '90s human.

What are they? How do they work? What do they do? Did you really clip them to your belt? The only people I've ever seen actually use pagers are doctors and Rory in very early seasons of Gilmore Girls, and neither of these instances have given me any details. Like, per this GIF: I DON'T KNOW! WHAT CAN YOU DO WITH A PAGER?

5. OK, so if you didn't have texting in high school or college — like, what? How?

Were you one of the cool college kids with an account? Was it ultra exclusive? Did you guys talk about it on your pagers? TELL ME EVERYTHING. (But actually though, it was a turning point in digital culture and I missed it.)

7. Do you cackle at the prospect of younger Millennials having their entire horrible adolescence documented online forever?

Because I just missed the mark on that (...kind of — there's, like, half of high school on there), and I definitely laugh on a daily basis thinking about what a nightmare it would be to have my middle school years just floating around ~in the cloud~.

Psst! For more talk about all things internet, check out our podcast, The Chat Room.

9. And you definitely flirted with strangers on MySpace, correct?

Did your parents warn you about Online Predators? Did that add to the fun? What was your MySpace background? Don't act like you have zero digital footprint, my sweet friends.

Was it food-, music-, or sports-related? I'm doubly curious because my family did not have AOL, and thus I NEVER HAD AN AIM ACCOUNT. It traumatizes me to this day.

~I wanna know / Can you TELL ME? / I wanna know if that trendy '90s beer tasted like Natty Liiiiight~

12. What was it like to mail in your college application?

Was it handwritten? Was that the most stressful moment of your LIFE, trying to perfectly handwrite those things and keep the pages pristine? It was bad enough in 2009 praying that the internet connection didn't fizz out or something.

13. You guys know you don't have to post unedited selfies on social media, right?

There are literally 50 apps for that. And Instagram filters.

See, we're not so different after all!