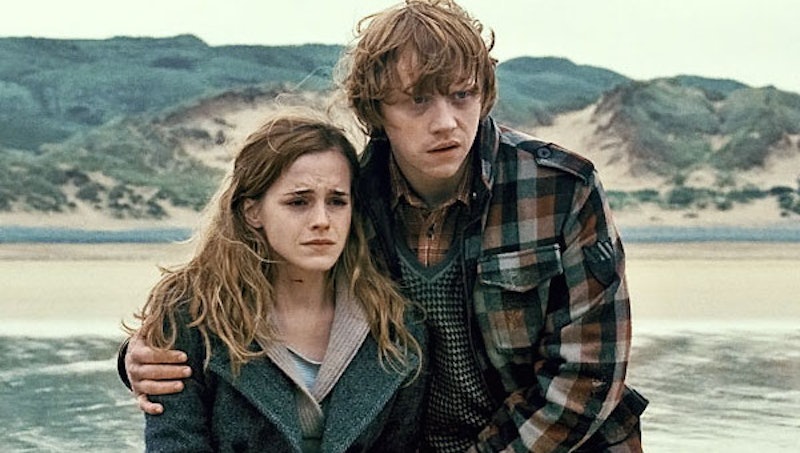 All I need from a relationship is someone who will understand if I cry through the entirety of Harry Potter and the Deathly Hallows... both parts, of course. There’s a lot of things that make me an emotional wreck in the last chapters of Harry Potter, and one of the biggest triggers is witnessing the culmination of Ron and Hermione’s relationship. Listen, I’ve been firmly shipping those crazy kids for almost 16 years now, and it’s so rewarding to see them finally put aside their squabbles as they fight to the death (again) during the Battle of Hogwarts. It’s just annoying, though, when people try to argue that Hermione and Ron aren’t meant to be.

Whether it’s your friend who’s held onto Harry/Hermione since they rescued Buckbeak or your co-worker who militantly believes Hermione should’ve ended up alone with an army of Crookshanks, those naysayers are out there. It’s to be expected; truth be told, Hermione and Ron’s relationship had a dreadful start with more than a few condescending looks. But their romance is a journey worth arguing for... not to mention, the other main Harry Potter couple is Harry and Ginny, and to me, it always felt so last-minute stapled onto the franchise.

In any case, here are just a few arguments that drive Ron and Hermione shippers crazy.

1. "But They Were Always Fighting, How Could A Relationship Between Them Work?"

Well, they were always bickering, like many people do when they're trying to conceal their feels. Communications isn't really a major at Hogwarts, so you can understand why they would struggle with that.

2. "But Their Courtship Seemed Really Sudden"

This could be argued depending on your attention span, especially if you're a fair-weather fan who only goes by the movies. Of course we have Ron and Hermione's Yule Ball tiff at the Yule Ball, but otherwise every romantic subplot gets thrust onto us in The Half-Blood Prince. Listen, there are plenty of little moments preceding all of that sixth year drama.

3. "But Do They Really Have Anything In Common?"

They have Harry in common. In fact, their mutual love for Harry pretty much sewed their relationship together, and that's probably enough to go on, tbh. So maybe Ron isn't obsessed with reading every book in the Hogwarts library... nobody can match Hermione when it comes to that. I'm sure behind the scenes they both probably have a mutual hatred of cranberries that they bond over.

4. "But Hermione's Far Too Mature To Put Up With Ron In The Long Run"

She's mature for her age, but clearly she also had to tighten up her social skills and learn how to be — how do I put this gently — a little less uptight. There's room for growth all around.

5. "But Hermione's Too Good To Put Up With Ron In The First Place"

Nobody's arguing this, but Hermione's honestly too good to put up with any man in the first place. Might as well be Ron, if it has to be someone.

6. "But Ron Was A Total Idiot To Hermione At The Yule Ball"

Eh, he was a 14-year-old boy having a jealous knee jerk reaction, sorting through feelings he couldn't yet comprehend as his favorite Quidditch player dances with his best friend/true love. I mentioned that thing about Hogwarts not teaching communications, right?

7. "But Ron Abandoned Hermione And Harry During The Horcrux Search"

Also not a great move, but that was a stressful endeavor. And what's important is that he came back, stirred by the sound of Hermione's voice saying his name, taken by that weird ball of light that went straight to his heart. Dude, come on.

But Lavender Brown nothing. It's all in the past now, and lest we forget, Hermione snogged Viktor Krum, so...

9. "But Does The World Really Need More Weasleys?"

This one's fair, the Weasleys are basically the Kardashians of the Wizarding World, at least in the sense that there's ballpark a gazillion people in that family. However, there's still a hole in that family after losing Fred, so procreate away, I guess.

10. "But Harry And Hermione Seem Like The Logical Choice"

Listen, there was a moment in my childhood where I shipped Harry/Hermione, but that quickly died out after Prisoner of Azkaban (and the infamous Yule Ball blow-out). They're not clawing at each other all the time, too, but Harry just sees her as a friend, a sister. Also he's a little too preoccupied with Ron's sister to jump on the Hermione, despite what that one weird scene in Deathly Hallows Part One would imply

11. "But There Was No Significance In Their Big Kiss In The Movies"

This isn't really a reason to not ship them, yet it is an annoying thing to remember. The books had Hermione overcome with emotions because Ron was urging to protect all the house elves during the Battle of Hogwarts. Hermione, bless her heart, had been trying to support house-elves with all of her S.P.E.W. efforts, so Ron's whole spiel was especially moving. But you know what gang, I'm sorry to say I'm not missing the big house-elf labor laws subplot from an already over bloated movie. There was less significance in the movie Ron/Hermione kiss, but goddamn, it was still pretty epic.

12. "But Even JK Rowling Regrets Making Them Endgame"

I worship at her altar, I do. We all do. And when she said she regretted making Ron and Hermione a couple, it devastated a vast portion of the fandom. What you have to keep in mind, though, is that Rowling makes weird judgment calls — Albus Severus Potter? — and has a lot of weird, retroactive guilt. And ultimately, she can regret Ron and Hermione all she wants, but it's canon. No take backs.