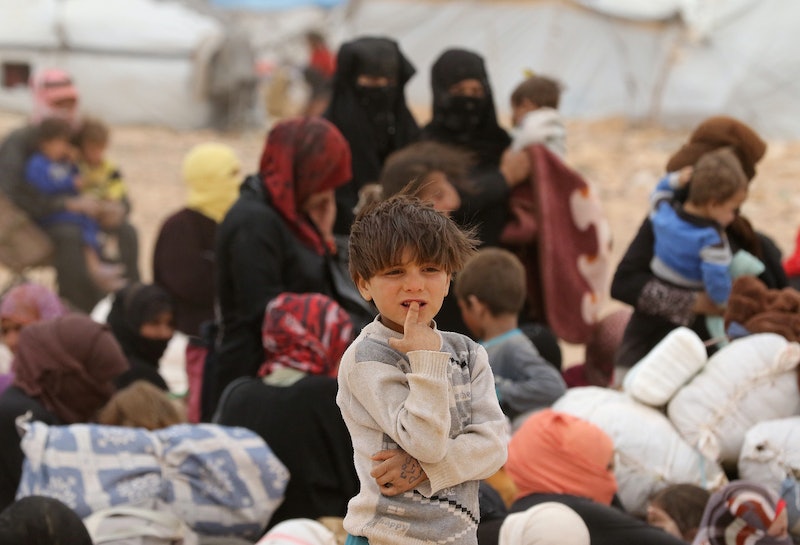 One of Donald Trump's most controversial national security policy proposals hinges on the idea that refugees from Syria and other mostly Muslim countries are dangerous. One of his go-to "arguments" for why refugees are dangerous has been based on an inaccurate account of their demographics. Trump has maintained that migrants into Europe are mostly young men, a claim that available data refutes.

Previously, Trump famously proposed temporarily banning Muslims from the United States, a position he backed up by suggesting we have reason to fear refugees, and Muslims generally. Similarly, Trump reiterated his views at an April 28 rally, The Washington Post reported, saying:

Look at what’s happening all over Europe … When you look at that migration, you see so many young, strong men. Does anyone notice that? Am I the only one? Young, strong men. And you’re almost like, ‘Why aren’t they fighting?’ You don’t see that many women and children.

Before addressing the falseness of Trump's demographic claim, let's take note of the fact that even young, strong men are endangered in a war zone, and don't have some kind of predetermined mandate to fight in war. The Washington Post noted that many of the young men who arrived in Europe in 2015 came by dangerous sea travel in an effort to obtain refugee status so that their families could come in through safer routes with authorization to enter the countries.

Trump's claim that young men dominate the migrant demographics in Europe was true for the first half of 2015. According to Telegraph, Gemma Gillie, a British spokeswoman for Medicins Sans Frontiers, explained the demographic shift: "Last year it was the strongest young men who were sent first, because it was a journey into the unknown. Now it is the women and children who are following."

Recent data confirmed that women and children outnumber men generally, and that young men make up a small portion of migrants. The Council of Europe reported in March that almost 60 percent of migrants and refugees entering Europe are women or children. Reporting on recent surveys from Greece, the main entrance point for migrants, The Washington Post noted that only 17 percent of Syrians (the largest migrant group) were males between the ages of 15 and 24; for Afghans — the second-largest migrant group entering Greece — 26 percent were males in this category.

In light of this, Trump was extremely far off saying that we "don’t see that many women and children" among the migrants traveling into Europe. The UN Refugee Agency reported that, as of January, 35 percent of migrants arriving by sea were children; women accounted for 20 percent.

Trump's claim that refugees are dangerous because they're predominantly men of fighting age is not only factually inaccurate, but it ignores the extensive vetting process refugees must go through to enter the United States. Finally, placed in a broader perspective, it's absurd that Trump has tried to argue that many refugees might be terrorists, which he has said would outweigh their immediate needs of survival; when we consider how many refugees have actually posed a threat to the United States, it becomes clear that many refugees in the U.S. do not present a terrorist threat.

Trump continues to employ false data to ramp up an already-exaggerated fear of Muslims and terrorism. Refugees are fleeing for their lives from the very people Trump names as our enemies: the terrorists. Only those Muslim migrants — women, children, and men — are in far more immediate and certain danger than we are.