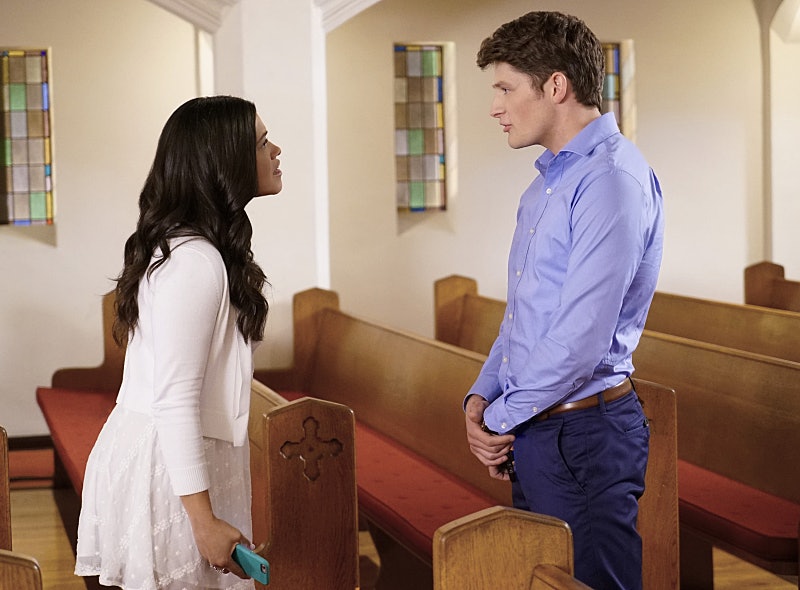 Hey, remember that totally sketchy person who was taking super creepy photos of Michael a few weeks ago, which made us worry about his future on the show? Well, if you were hoping those fears weren't going to amount to anything, then the Jane the Virgin Season 2 finale left you undoubtedly disappointed. I say that because the worst thing has come from all of this... or at least that's what the writers want us to believe. Because while the wedding itself was beyond heartwarming (Michael said his vows in Spanish!), what happened afterward was downright heartbreaking. Michael was shot by Susanna (who was actually Rose this whole time). But is Michael really dead or is there a chance he'll survive such a severe injury? Unfortunately things are not looking good.

Here's what went down... right before Jane and Michael were preparing to "seal the deal" on their marriage, Michael went for ice and bumped into Suzanna. That's when he caught her in a lie and realized that she was the mole this entire time. Before you knew it, she pulled out a gun and shot him in the chest. IN THE CHEST, people! As in the place where the heart is located, which makes me very nervous if a recovery is even possible. But it has to be, right?

Michael and Jane were so happy together. To have that be ripped away from them permanently would be downright cruel. And the fact that Jane accidentally dropped the snow globe that Michael gave her at the same time this was happening should qualify as emotional torture. Why are you doing this to us, writers? I can't even imagine Jane's reaction when she finds out what happened. Will they be able to save Michael in time? Is Brett Dier returning for Season 3? There are things we unfortunately have all summer to ponder, so in the meantime, don't mind me. I'll just be curled up in a ball weeping until then. See you next fall.