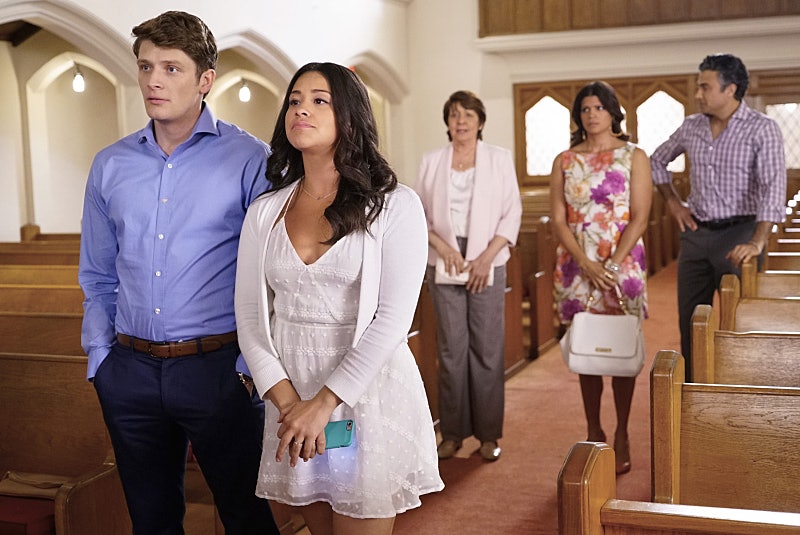 I wholeheartedly assumed that the Jane the Virgin Season 2 finale would leave us with a whopper of a cliffhanger, but even I wasn't prepared for everything that the episode had in store. Not only did Anezka paralyze and start impersonating Petra, but Michael's former partner Susanna is actually Rose in disguise. Oh, and don't forget the small detail of Michael getting shot and potentially killed by Susanna/Rose right after his wedding to Jane. We shouldn't known that the kind of happiness they were experiencing wouldn't last forever. But does this mean that Michael won't return for Jane the Virgin Season 3? Unfortunately, for now, that's a question that'll go unanswered.

The good news is that we only saw Michael get shot, we didn't see what kind of state he was in when his body hit the floor. Obviously, the best scenario here is that it's a severe injury that can be treated with the proper medical assistance. And then, the worst case scenario is... well, let's not go there just yet.

The optimist in me wants to believe that Brett Dier is too important to show for the writers to actually kill off. Odds are he'll be in critical condition, potentially even in a coma, but the series has just left us hanging to leave us in suspense. (Mission accomplished, by the way.) Even Dier himself doesn't seem to know his character's fate:

So unless he's been taking lying lessons from Kit Harington, he is just as much in the dark as the rest of us. But that, in a weird way, gives me hope that he still has a future on the series. After all, I'd like to think they'd tell him if he no longer had a job. So hang in there, folks. There could be hope for Michael yet.