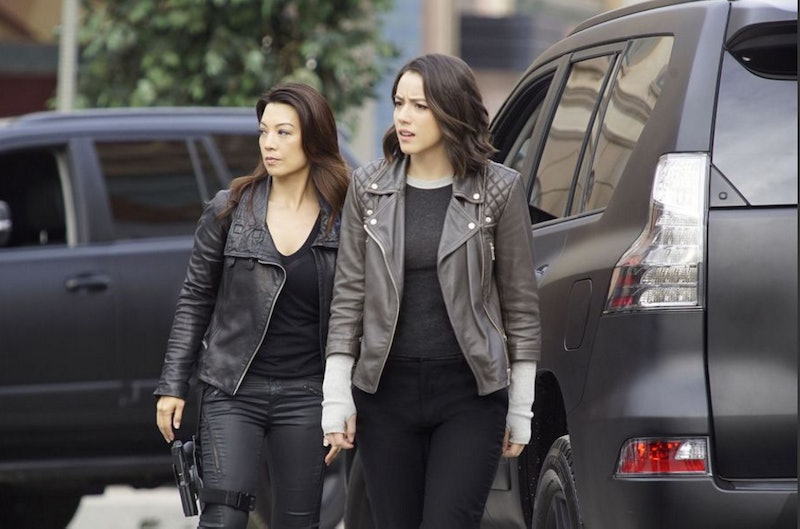 Less than a week ago, there was still a possibility that three Marvel series would get a spot on ABC's 2016-2017 primetime schedule. But with the cancellation of Agent Carter (pour one out for Peggy) and the nixing of the S.H.I.E.L.D. spinoff, Marvel's Most Wanted, Agents Of .S.H.I.E.L.D. will be representing as the only Marvel Cinematic Universe property on network TV. Season 3 of the ensemble sci-fi drama comes to an end with a two-hour finale on Tuesday and if you have probably been reminded once or 20 times by the season finale promo that someone on Agents of S.H.I.E.L.D. is going to die. That may or may not be a moment that you'll want to relive a few times before Season 4, in which case you'll want to know when Agents of S.H.I.E.L.D. Season 3 will be on Netflix.

Some series don't get their previous season onto the streaming service until a week before the next season's premiere and that makes responsible rewatching a race against the clock. (What if you don't remember every single detail? You won't be that kind of fan.) But Season 2 of Agents of S.H.I.E.L.D. premiered on Netflix in early June of last year, only about a month after that season finale aired. No official date has been announced for Season 3's release, but it's a good bet that the 30-day buffer will be repeated.

When Agents of S.H.I.E.L.D. Season 3 does drop on Netflix, you can experience these epic scenes again.

Fitz told Simmons this season that their love is probably "cursed." Probably because things like that monolith portal keep happening to them. But Fitz would stop at nothing to rescue his best friend from the desolate planet of Maveth. Anyone with a heart can understand Hunter's need to celebrate that.

When Hive Was Revealed

There's karma in former Hydra double agent Grant Ward becoming the host to a parasitic Inhuman that controls his thoughts and actions. And long-time S.H.I.E.L.D. cast member Brett Dalton is killing it in yet another incarnation of this character.

When The Secret Warriors Went To Work

Defender of Inhuman rights and natural leader Daisy got to form her own team of enhanced individuals in Season 3. Lincoln, Elena, and Joey make up the squad that has an auspicious history in Marvel comics. The highly anticipated deployment of the Secret Warriors was marred by Hive's involvement, but I bet they'll be back and in fighting shape next year.

When Hunter & Bobbi Got Their Spies' Goodbye

Now that the Hunter and Bobbi spinoff isn't happening, this bittersweet farewell was all for nothing. The agents exited the show when they compromised themselves during a mission in Russia. Coulson had to disavow them to save their lives. There'd be no send-off party; all their fellow soldiers could do was silently raise their glasses to them from across a crowded bar.

When Lash Sacrificed Himself For Daisy

Lincoln and the rest of the team pulled one over on Hive when they acted like Lincoln was going to escape his containment to be reunited with Daisy. Instead, they sent Lash (remember that May's Andrew had been permanently turned), and he gave his life to get Daisy out of Hive's control and back to her friends.

Even if your favorite agents don't survive the Agents of S.H.I.E.L.D. Season 3 finale, at least they'll live forever on Netflix.