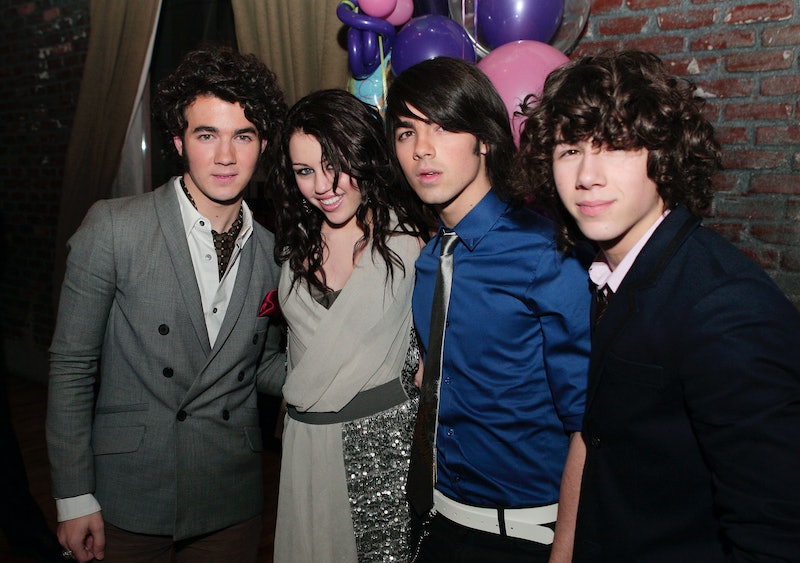 If you were a tween or teen in the late 2000s, there's no doubt that you were likely very interested in the romantic life of Disney's biggest stars including Miley Cyrus, the Jonas Brothers, Selena Gomez, and Demi Lovato — a love web so tangled, a dating map was created by E! to sort it all out — and even the biggest Disney fans would have a hard time keeping up. Of course, the group has grown up, fostering mature, adult relationships, but that doesn't mean people aren't still interested, which is why James Corden took the opportunity to ask both Lovato and Jonas about their dating history in his most recent version of Carpool Karaoke. And it turns out we could all learn a bit from how Jonas and two of his exes have moved on after their splits.

For a bit of background, Lovato is currently in a long-term relationship with fellow actor Wilmer Valderrama, and Jonas, well... he's been linked to multiple women these days, from actor Kate Hudson to model Kendall Jenner. Lovato and Jonas insist to Corden that they've never dated, but gushed about how they've been friends for 10 years, which is so sweet. Lovato did date Jonas' brother, Joe, but never moved beyond friendship with Jonas.

Though his dating life is subject to plenty of rumors, Jonas sheepishly seemed to confirm that he'd dated Cyrus and Gomez twice, something he's never clearly addressed until now.

In the hilarious skit, Jonas jokingly confirmed he's dated "seemingly everyone" before Lovato chimed in that he dated "Miley, then Selena, then back with Miley, then back with Selena," and he first tried to deny it, prompting Lovato to proclaim "Lies!" and call him "Liza Minnelli back there." And the jig was up when Corden said, "And this is all during the time that you're wearing the old purity ring," and Jonas said, "It was. Yeah."

It's honestly pretty remarkable that Jonas' relationships with Cyrus and Gomez remained so cordial under a white hot spotlight of fame. Jonas dated Cyrus first, for about a year in 2006, ending in a breakup that resulted in a few revenge songs (hey, these are teen pop stars after all!) with Cyrus singing her hit "7 Things" reportedly about Jonas, and Jonas' band singing "Sorry" rumored to be about her.

Enter Gomez into the fray in 2008, and you've got a love triangle brewing to rival that of Brangelina (OK, or maybe just Hilary Duff, Lindsay Lohan, and Aaron Carter). These two reportedly dated on and off from 2008 to 2010, making waves when they both removed their purity rings (oh, the horror!) before splitting for good. Of course, Gomez went on to date singer Justin Bieber, and the world still isn't over that relationship.

Naturally, at the time, there were rumors of a feud between Cyrus and Gomez, but the remarkable thing is that despite the link of Jonas between them, the two never really had any problems, proving that they're more mature than your average teens by far. In 2016, Gomez addressed the rumors with W magazine, revealing,

We never feuded. We both liked the same guy when we were 16. It was just a Hilary Duff–Lindsay Lohan thing: "Oh, my God, we like the same boy!" We are now completely settled in our own lives.

She also said that she's a big fan of Cyrus' music, but discusses the differences in their transition to an adult career, saying,

For her part, Cyrus has never outright addressed any feuds, though she did make headlines in 2014 when she threw a cardboard cutout of Gomez into the audience during a concert. Cyrus never addressed it, so it's impossible to confirm her reasoning behind it... but I think it's safe to say she was "just being Miley."

As for Jonas, well, it seems like he has nothing but good things to say about his former exes. In 2015, he told Elle magazine of Cyrus,

I was so young. What's unfortunate is that, as we got older, we ran in different circles. We've always had respect and wished the best for each other. I don't know that I have any regrets. It's more gratitude for having had a good friend in a time of craziness in my life and in hers.

He hasn't commented on Gomez specifically, but photos surfaced of the two hanging out at a party in 2015, proving that they're still on good terms years after their split. In a weird way, it seems like we could all take lessons from these three on handling a breakup with grace and maturity. It's definitely something to think about the next time you go to tweet an angry message at your ex, or throw shade at their new relationship. Let bygones be bygones, à la Jonas, Gomez, and Cyrus.

More like this
Selena Gomez Is Fine Being Single, But She Still Manifested Romance On 'SNL'
By Martha Sorren, Jake Viswanath and Jack Irvin
Justin & Hailey Bieber's Bond Is "Unbreakable" Amid His Ramsay Hunt Diagnosis
By Bustle Editors
Who Is Betty Who Dating? The Australian Singer Is Married To Her Tour Photographer
By Radhika Menon
Adele Says Postponing Her Las Vegas Residency Was “Brutal”
By Alyssa Lapid
Get Even More From Bustle — Sign Up For The Newsletter