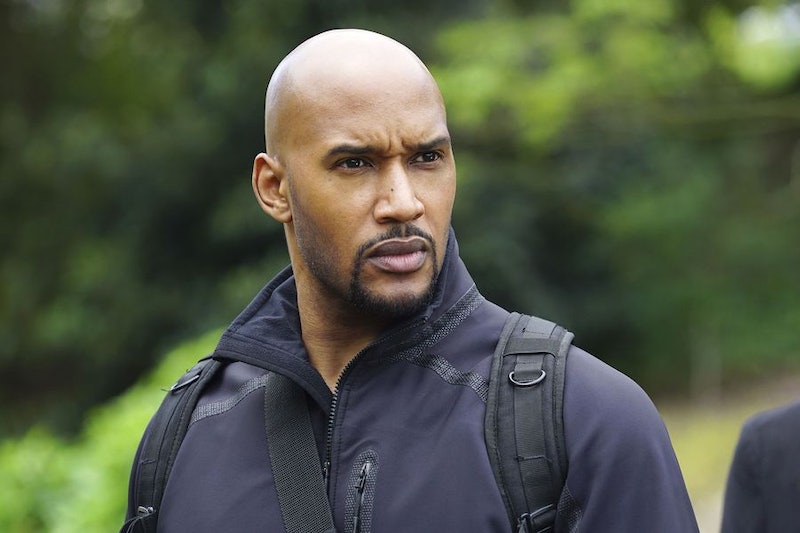 Agents of S.H.I.E.L.D. is winding down, with only the two-hour season finale left before we're stuck in the cold of the summer hiatus. But, before the show concludes its third season, they're looking to break our hearts with the death of an agent that has been foretold since "Spacetime." Unfortunately, the ending of Agents of S.H.I.E.L.D.'s penultimate episode "Emancipation" seemed to hint at the identity of the fallen agent, but I'm here to call the show's bluff. Here's why Mack won't die in the Agents of S.H.I.E.L.D. Season 3 finale.

First off, let's break down everything we know about Daisy's vision of the future that revealed someone was going to die: The scene was first teased in the opening of the midseason premiere, "Bouncing Back," and depicted a space-bound quinjet with zero gravity containing blood, a cross necklace, and the shoulder of a S.H.I.E.L.D. agent (recognizable by the logo). This scene returned in "Spacetime" when Daisy saw it in a vision of the future from an Inhuman, whose visions always come true — but not necessarily always in the way we think (just as Gideon thought the vision of his death meant he would be killed by Hive, but he was actually killed by Daisy). That's all we know for sure.

So, the hint that Mack could be the fallen agent came at the end of "Emancipation" when he was given the cross necklace by Elena. Obviously, whoever has the necklace is destined to die, right? Well, I don't think it's that simple because Agents of S.H.I.E.L.D. is never that simple. Certainly, Mack might have the cross necklace at the beginning of the finale, but it's two hours long and a lot can happen in that time.

As executive producer Maurissa Tancharoen told Entertainment Weekly, the cross necklace is a "hot potato of death" in the Season 3 finale and switches hands multiple times in the episode. In fact, a clip from the finale episode released by Marvel shows Mack trying to give Elena the necklace in the midst of a dangerous mission. At this point, since Mack was given the necklace first, — and was, therefore, the first agent hinted to be dying — he seems like the too-obvious choice to become the fallen agent.

Plus, Agents of S.H.I.E.L.D. recently made fans suffer through Mack almost dying when he fought Daisy while she was under the influence of Hive in "Failed Experiments." If he were to survive that traumatic experience (which almost gave me a heart attack while watching it unfold) and then die in Daisy's vision, that would be too cruel of a move by Agents of S.H.I.E.L.D.

There have been so many hints that Mack will become the fallen agent that, at this point in the season, it seems implausible. He's the red herring meant to throw viewers off the track of the agent who will actually die on the quinjet. (Honestly, my money's on Lincoln.) But, unfortunately, we'll have to watch the Season 3 finale of Agents of S.H.I.E.L.D. to find out once and for all who the fallen agent is. Be sure to have tissues at the ready!