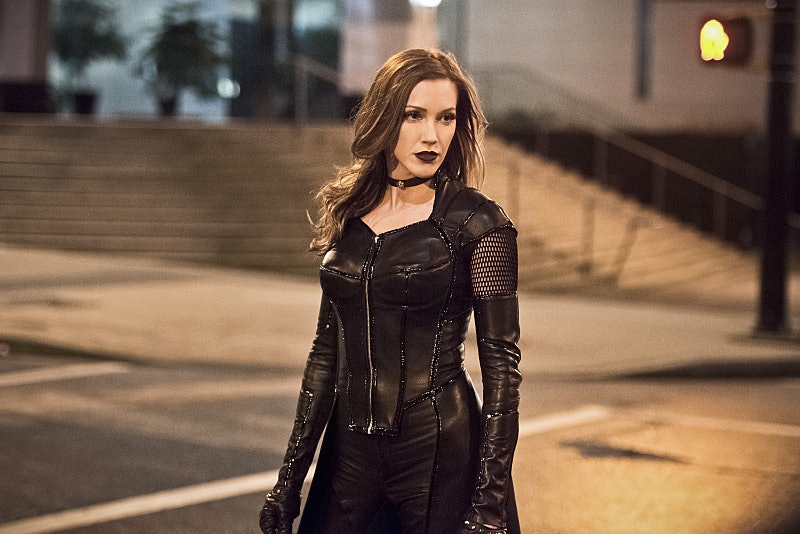 Losing a beloved TV character is never easy, but thanks to the power of supernatural loopholes, saying goodbye isn't always as permanent as it used to be. Just take Arrow's Laurel Lance, for example. While it's true that the Black Canary met her maker in Star City, the actress herself, Katie Cassidy, will guest star on The Flash this Tuesday and take on the role of Laurel's Earth-2 counterpart, Black Siren. So who exactly is Black Siren and how will she fit into the Central City gang? Much like the case of Killer Frost was to Caitlin, Cassidy's Black Siren will serve as the polar opposite of the kind and heroic Laurel we used to know. Because not only is this Earth-2 version a metahuman, but she's also aligned herself with Zoom.

Those familiar with the DC Comics version of the character will undoubtedly find this alliance rather puzzling, considering that Black Siren, known as Donna Nance, was a member of the Justice Society and used her martial arts skills for good, not evil. So it's very out of character to see her in such a villainous role. However, let's not forget that this is Earth-2 we're talking about, which has already proven to be the home of many evil doppelgängers. (Looking at you, Killer Frost and Reverb!)

Plus, as I mentioned before, there's the fact that this version of Black Siren has actual metahuman abilities, which seems to have a nasty habit of corrupting even the nicest of people (with the exception of Barry and Cisco, of course). So for all we know, she may have been a lot like the Laurel we once knew before the Particle Accelerator explosion turned her into one of Zoom's main cronies.

Speaking of which, I can't help but notice how chummy Zoom and Black Siren look in these promo photos. In fact, Zoom is even comfortable enough to take his mask off in front of her, something we've rarely seen him do in front of anyone but Caitlin. Is it possible that these two have a romantic history together or are linked in a way that goes beyond just partners in crime?

Either way, I'm thrilled that we're going to get to see any version of Laurel back on our television screens. And hey, what if the S.T.A.R. Labs gang ended up converting her to fight on their side? Then she could become a permanent member of the team and we could just forget that the whole Laurel dying thing ever happened... right?