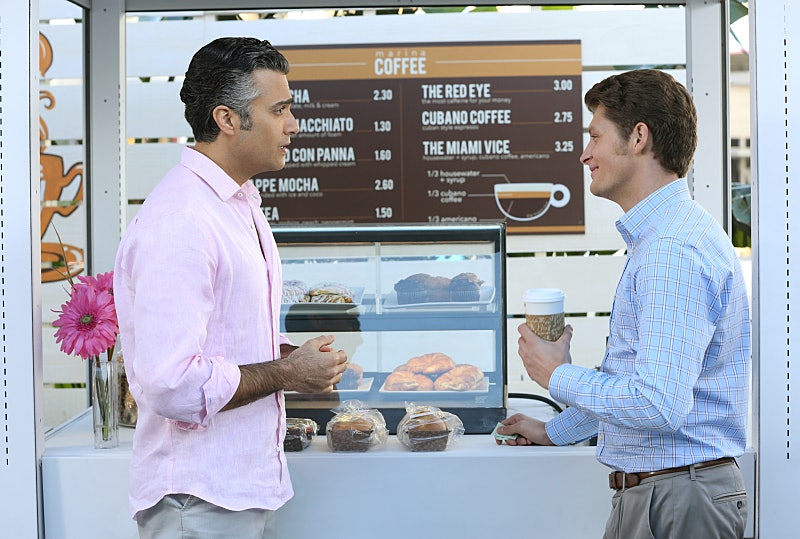 By now, fans of the CW's Jane the Virgin know to expect the unexpected, yet you're lying if you say that you got through Monday's Season 2 finale without letting out a few gasps. Spoilers ahead! The episode was filled with massive surprises, from Petra being petrified (best pun ever, JtV) to Xiomara finding out she's pregnant to, most shockingly of all, Michael being shot in the chest by his partner, Susanna aka Rose. Seeing Michael, who'd married Jane just hours before, in mortal danger was heartbreaking for viewers to watch, but according to JtV actor Jaime Camil, no one will be more upset if Michael dies in Jane the Virgin Season 3 — or even just gets gravely injured — than his on-screen BFF.

"Are you kidding? Rogelio will be devastated," Camil says, when Bustle asks him how his character will handle the news. "It’s gonna be very difficult for him."

Michael and Rogelio are, after all, #Brogelios, and it's hard to imagine Camil's character not falling to pieces upon hearing that Michael's been hurt. The actor jokes that Rogelio will have to employ Jane's C.A.L.M. technique (cell phone, avocado mask, lavender, mirror) in order to be OK, and Camil, too, will be heartbroken if Michael dies; when he read in the script that Michael would be shot, he "wanted to punch the wall," he recalls. Like Rogelio, Camil can't fathom the idea of Michael dying, or even getting terribly hurt; if the idea of Michael being shot was pitched on Tiago, Rogelio's time-traveling soap opera, Camil jokes that his character would "probably fire the writers that came up with that idea."

"For the love of God," he adds with a laugh. "We wouldn't even consider Michael getting hurt." Speaking about it, it's clear that the actor is still sad about the fact that JtV decided to do just that — especially because, like viewers, he has no idea if Michael will make it out alive.

"I don’t know what’s going to happen," Camil says. "I hope that he will not die. Obviously he’s a big part of the story, so I’m just lighting up my candles for that."

The actor reveals that he and his fellow Jane the Virgin stars are typically not given the next script until close to the start of production ("We are not kept in the circle of trust of [showrunner] Jennie Urman," he jokes), meaning that for the next few months, he'll be as in the dark about the fate of his on-screen BFF as the rest of us. Here's hoping this cliffhanger gets resolved before long, both for the sake of Rogelio and the equally concerned Camil.