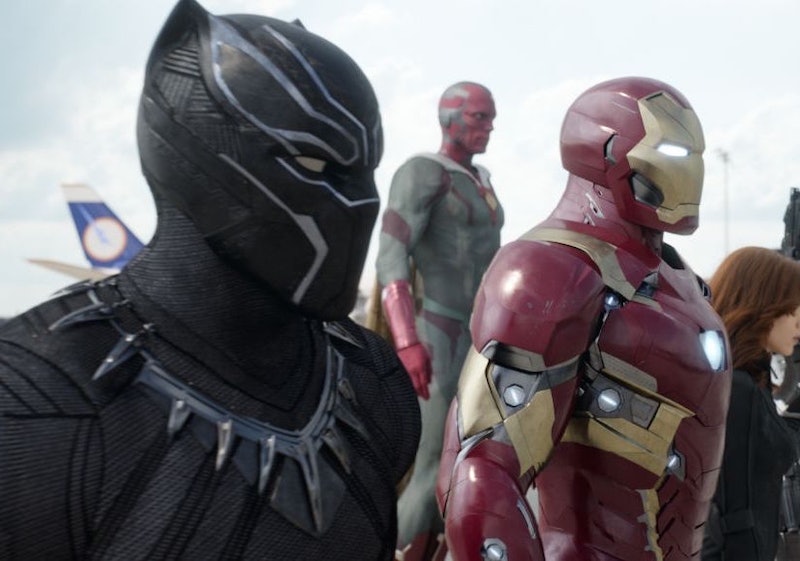 If you were like me and you ran to see Captain America: Civil War as soon as possible, then by now you're already well aware of the new characters introduced to The Avengers. And while yes, I am personally obsessed with Tom Holland's portrayal of Spider-Man, it was another new character in the Marvel Cinematic Universe that really stood out to me: the Black Panther. T'Challa — the Prince-turned-King of the African kingdom Wakanda — is played by actor Chadwick Boseman and basically stole the spotlight from the film's own Captain America and Iron Man. With his passionate drive, killer moves, and overall brains on the whole situation, it was hard not to immediately sense that this guy has some secrets behind him. And, according to the director of the upcoming Black Panther solo film Ryan Coogler per Entertainment Weekly, this is only the beginning for Marvel's latest character. Because this character's storyline is going to be going deep.

“It’s a specific challenge. What Marvel’s doing, and what you see a lot of studios doing now that Marvel has done it so successfully, is making content that exists in a particular universe, where the characters tie in and crossover, and I think that’s a great creative challenge to me — to make this movie as personal as possible," shared Coogler in a recent interview with Entertainment Weekly. "It’s going to be my most personal movie to date, which is crazy to say, but it’s completely the case. I’m obsessed with this character and this story right now, and I think it’s going to be very unique and still fit into the overall narrative that they’re establishing."

So what exactly does Coogler mean by "personal"? Well, in this instance, it's safe to say that Coogler's prior familiarity with the Marvel comic books will be coming into play with the ways in which he's directing the project. And the connection the director has to the comic books themselves definitely makes it personal. "I grew up as a comic book fan, and the same things used to happen in the comic books. You’d have Wolverine’s books, and they’d be so much darker and more brutal than the X-Men books, but they’d still fit in when you open the pages of the X-Men book," explained Coogler, "It’s new to movies, but it’s not new to storytelling.”

However, there's something about the Black Panther's story that gives it a whole lot more depth than we've seen in the character's that Marvel has introduced on the big screen so far. With stories behind T'Challa's African origins in relation to the meaning of the Black Panther, his relationship with his recently deceased father, T-Chaka, and what his own country may currently be dealing with all weighing down on him, fans sure are entering this Marvel character's story with a ton of questions ready to go. And — considering the amount of work that Boseman has put into the character already — I believe it's the personal nature of T'Challa that is going to be highlighted as well. Not just the personal connections that Coogler is having to the project himself.

As for me, I'm keeping my fingers crossed for a good amount of historical flashbacks in the Black Panther's film. Since, if the history of the Black Panther and T'Challa's own family reign is of vital importance, it would only make sense that we get our fair share of knowledge on the topics as well. Also, in accordance with the ending of Captain America: Civil War, I'm not sure just how much the rest of the Avengers characters might play into this one. Meaning that we could be seeing one good old-fashioned, Avengers-less superhero film on our hands.

But until we get more details, it looks like we'll just have to wait and see. Captain America: Civil War is in theaters now and the Black Panther solo film won't be hitting the big-screen until February 16, 2018. But let the countdown begin!