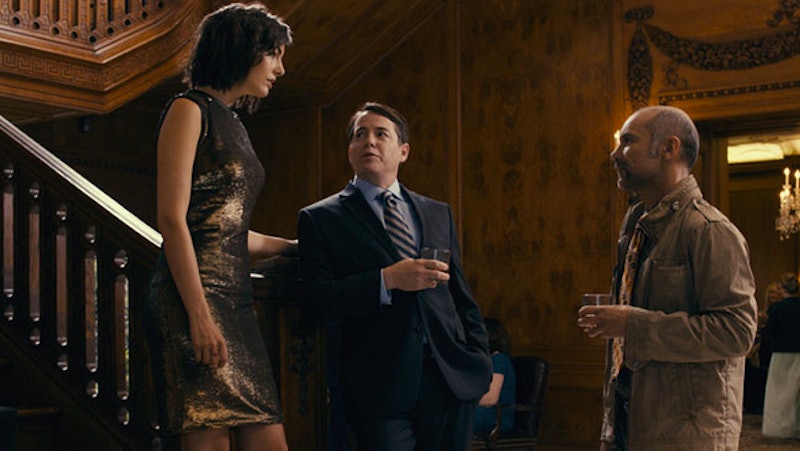 Female actors almost always get the short end of the stick in Hollywood regardless of the type of film, but one genre that is almost universally unkind to women is film noir. The women in these types of movies are practically always a conniving seductress, a hapless damsel, or a ditzy dame. But director Jenna Ricker is looking to change that with her new film, The American Side . This neo-noir is a crazy caper that turns the genre on its head with unexpected and complex characters, skillful injections of humor, an inventive plot, and a predominantly women-led cast.

"With a genre like noir, that often boasts only the femme fatale role for women, I wanted to populate it with as many strong female characters as possible," Ricker tells Bustle. "An important part of crafting a mystery is subverting the audience's expectations, so, when Janeane [Garofalo, one of the film's stars] came onboard to play FBI Agent Barry I was thrilled. I wanted an actor whom the audience would recognize as smart and savvy, so they would lean in to listen more closely, while at the same time shake up outdated gender roles." In addition to Garofalo's FBI agent, the film also features Alicja Bachleda as Nikki Meeker, a genius who plays a significant role in driving the film's plot, which involves a missing notebook page describing a fantastical invention from the late Nikola Tesla.

The exclusive clip below is a turning point in the movie, and one of the most important moments, according to Ricker. "This clip is one of my favorite scenes in the film," she says. "It's the moment the audience has been waiting for — information about the film's 'MacGuffin' — a recently discovered design by the enigmatic inventor, Nikola Tesla ... The scene is loaded with important information the audience needs to know." Check out the clip below, featuring Garofalo as Agent Barry and Greg Stuhr (who co-wrote the film with Ricker) as Private Eye Charlie Paczynski.

With any luck, Ricker's The American Side will help further the trend of flouting gender norms in Hollywood, resulting in more diverse roles for women in cinema. It's not often that you see a woman cast as a bright FBI agent or a great mind the government keeps under surveillance, so seeing both of these types of characters in the same film is very impressive, and hopefully a glimpse into Hollywood's future.