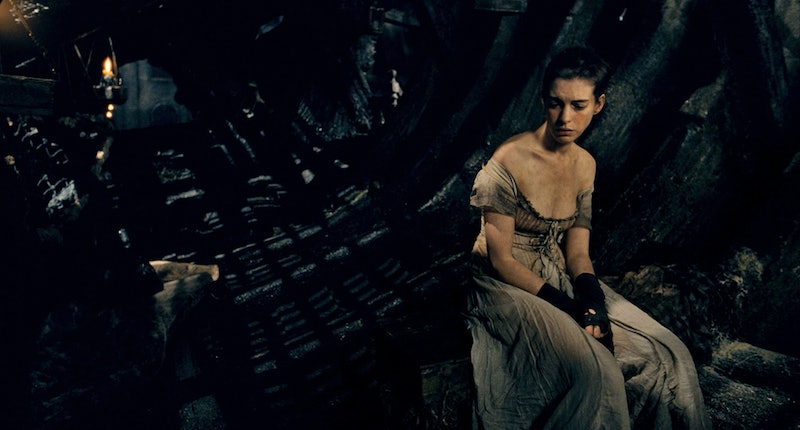 It's no secret that Hollywood has a gender problem. Jennifer Lawrence's piece on the wage gap in Hollywood went viral in 2015, and during that year's Oscars, Patricia Arquette made a call for equal pay during her acceptance speech. But money isn't the only area of gender inequality when it comes to awards shows. As a recent tally conducted by Fusion shows, there is a striking amount of role inequality in Oscar winners of different genders, too. In the study, it was determined that 16 percent of the women who have taken home the Best Actress Oscar over the past 88 years of the Academy Awards have done so for playing the very complicated role of... wives.

For the study, Oscar-winning roles were sorted into 23 professions or defining roles, from wife/husband to law enforcement. While the exact criteria for the sorting process is unclear, the study maintains that the professions were determined based on importance via the story and final product. For example, if a female role was both a wife and an entertainer, like Reese Witherspoon in Walk The Line, Fusion determined the dominating job (in Witherspoon's case: Entertainer). In the final tally, the comparisons of Oscar-winning roles between the genders is pretty depressing.

While an estimated 16 percent of women won Oscars for playing wives, only two percent of men won Oscars for playing husbands. Overall, female actors have won the same percentage of Oscars for playing widows and blue collar workers (10 percent each), whereas men have won awards for playing blue collar workers six times more than they have for playing widowers. Looking at this year's nominees for the Best Actress category, you have two wives (Cate Blanchett and Charlotte Rampling), one mother (Brie Larson), one shopgirl (Saoirse Ronan) and one entrepreneur (Jennifer Lawrence). On the male side, you have one screenwriter (Bryan Cranston), a scientist (Matt Damon), a fur trader (Leonardo DiCaprio), a tech innovator (Michael Fassbender) and a painter/husband (Eddie Redmayne).

Looking at just those roles and professions, you can see a striking difference between the genders. A majority of the nominated roles for males are defined by professional, well-respected jobs. The women, on the other hand, are defined by their relationships or their roles as caregivers.

It's not that being awarded an Oscar for playing a mother is wrong, or even offensive — motherhood is a huge part of life, and should be respected as such. But when the women winning Oscars are overwhelmingly winning for roles that defined them as mothers or wives, it becomes a problem. Consider this: should Brie Larson win an Oscar for Best Actress on Sunday, she will win for playing a character named "Ma," just one year after Patricia Arquette took home the award for Best Supporting Actress for her role as "Mom." It's not that the roles themselves are belittling to women, but the fact that they exist only in relation to the (coincidentally) male children they have is problematic.

Movies are often regarded as an idealized version of reality. Even films about horrible true stories involve some sort of romanticism, whether it's the guy in the corner wearing an elaborate costume or the poreless faces of everyone on-screen. The fact is, part of Hollywood's appeal is that it shows us what we can be, not necessarily what we are. So what does it say about us that the idealized versions of women are rarely scientists or lawyers? I think the message is pretty clear: to be valued, women should dream about being wives and mothers, while men should dream of being professionals.

More than that, the numbers indicate how men and women are allowed to see themselves represented on-screen. Six Best Actress Oscars have been awarded to women playing sex workers, while no Best Actor has ever won for playing one. Based on that statistic alone, one can see how roles that emphasize a woman's sexuality are celebrated and pushed to the forefront, while male roles don't require a similar appeal. Anyone who has seen a movie can tell you that this is indicative of Hollywood as a whole. Average-looking men can end up with supermodels on-screen and nobody bats an eyelash, but nearly all leading ladies tend to fit the current model of attractiveness, regardless of the looks of their male partners.

The roles recognized by awards shows help perpetuate a system in which women are taught to value their bodies and gender roles as mothers and wives over their minds. Unfortunately, until the movie industry changes, the kinds of roles recognized by the Academy will remain the same.

More like this
Sandra Bullock, Girlboss Extraordinaire
By Matt Harkins & Viviana Olen
The 'Hocus Pocus' Sequel Finally Has A Release Date & It Makes Total Sense
By Shannon Barbour and Radhika Menon
'Stranger Things' Star Joe Keery Is Dating An "Indie Scream Queen"
By S. Atkinson and Grace Wehniainen
Laura Dern Said “Cultural Awareness” Made Her Rethink This 'Jurassic Park' Fact
By Grace Wehniainen
Get Even More From Bustle — Sign Up For The Newsletter