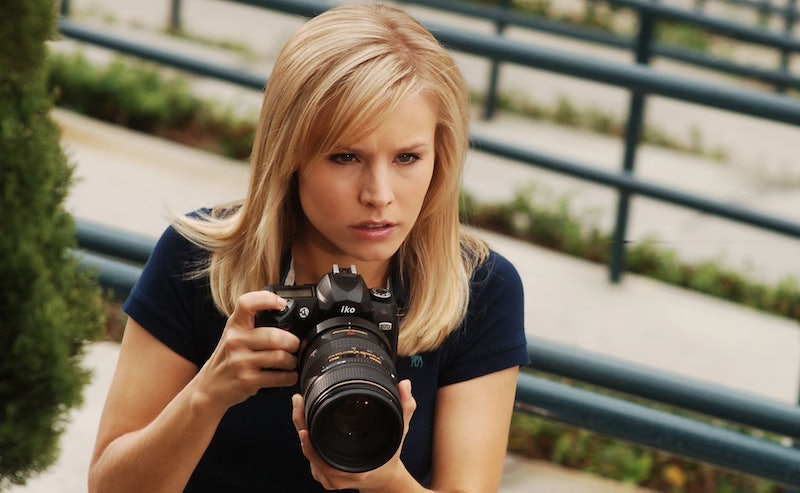 If you're a real, true, hardened Veronica Mars fan, then you should already know that the premise of the show — a teenaged private eye — didn't come from a desire to bring a Nancy Drew-type into the 21st century. (That would have been adorable, though). No, the original concept for Veronica Mars was that of a modern gender-swapped Film Noir for the small screen. If you're familiar with the genre, you can see it clearly in the show — and, if you're not, you're probably wondering, "Well, what makes up a Film Noir, and how exactly does Veronica Mars exemplify that?"

Don't worry, my dear readers, I've got you covered. I collected a few of the most common Film Noir tropes and sought out how it connects to our favorite blonde-haired heroine, as well as the dark and gritty world of Neptune. Turns out, the "gender-swapped Film Noir" isn't just a playful descriptor; there's a whole slew of Noir trademarks that Veronica Mars takes on. And, like a trench coat-wearing P.I. trying to solve a grisly murder, some of the things I discovered were shocking. But, altogether, Veronica Mars really knew how to elevate these clichés into something that didn't feel hokey to a new generation.

Are you ready, Marshmallows? Below are a selection of the most obvious Film Noir tropes in Veronica Mars, uncovered and explained for your consideration.

Take this line from the pilot episode of Veronica Mars: "This is my school. If you go here, your parents are either millionaires or your parents work for millionaires. Neptune, California. A town without a middle class." In classic Noir fashion, Veronica sets up the scene with the series' "city" (read: class-torn California suburb) and continues to voice over throughout the show's run.

What would Veronica be without her endless stream of one-liners? Nothing but grimness and cynicism (with a dash of adorableness). Oh, and about that...

Less discussed than her wit but equally important: The fact that Veronica's attitude toward life after her best friend Lilly Kane's murder is far more jaded than the innocent girl seen in flashbacks. You can thank the Dark and Troubled Past trope for that.

Most members of Neptune's police force — you know, the ones that aren't the adorable Deputy Leo — fall under this category, but it's Sheriff Lamb that tends to take the cake.

6. Jerk With A Heart of Gold

I feel like most of you would peg another Veronica Mars bad boy (Logan) as this one, but I'm gonna go ahead and say that this is what Weevil evolves into. He starts off as a hardened, motorcycle-riding gang leader, and ends up talking about tea parties with his daughter at Neptune's high school reunion.

THIS IS LOGAN. LOGAN ECHOLLS IS THE FEMME FATALE OF VERONICA MARS. He's dangerous, often involved in the mystery at hand, has romantic tension with the lead character... it's all there. He even gets his own voice over description — but, instead of being a gorgeous blonde with legs for days and a diamond necklace he couldn't POSSIBLY afford, he's the school's "obligatory psychotic jackass." Still, it's Logan who facilities the plot for the VM movie by calling on Veronica for help, proving that the gender-swapped aspect doesn't just apply to Veronica.

Can be characterized as a "private detective" or "amateur sleuth," which are terms that could definitely define Veronica at certain points in the series. But, that said, this title could easily be passed onto Keith, who, after getting stripped of his Sheriff's badge, worked to uncover and put an end to the corruption of the Neptune police.

OK, so Veronica Mars isn't shot in black and white. That kind of filter probably wouldn't have worked on contemporary television all that well. Still, it often feels like certain episodes are saturated in tones of blue and green — with those Lilly Kane flashbacks having an especially eerie vibe.

10. Sympathy For The Devil

I personally can't garner sympathy for Beaver, because he's really a monster, but objectively I could understand how his past — the molestation, the constant teasing, et al. — could lead him down his dark path.

There isn't really a mafia, per se, but there's oodles of organized crime in Neptune: from rowdy gangs to less formal powerful figureheads pulling the strings behind the scenes.

The series ends with Veronica walking out into the rain, shrouded in sadness after casting a vote for her dad in what appears to be an already-lost battle for Sheriff. Nothing better encapsulates that feeling of Film Noir... and more than that, the feeling fans all had when the show was unfairly canceled.

So, you know, eat your heart out Humphrey Bogart.