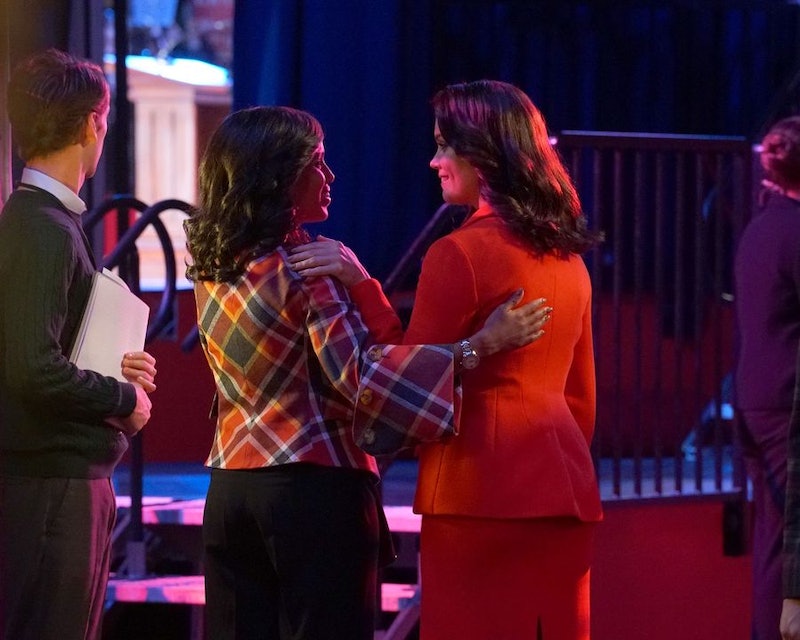 Gladiators, don’t freak out. Olivia Pope and her crew will sadly not be gracing (or killing people on) our TV screens this fall, but in typical Shonda Rhimes fashion, it’s being handled. Here’s the deal: Scandal will not be returning in Fall 2016 with the rest of the glorious fall TV shows. In fact, it's being removed from Shondaland’s ever-so-perfect TGIT block altogether. Just before ABC’s 2016 Upfront presentation in NYC, the network announced that Grey’s Anatomy will still air on Thursdays at 8 p.m., as well as How To Get Away With Murder at 10 p.m.. But another new show (not by Rhimes), Notorious, will be filling Scandal’s spot on Thursday nights at 9 p.m.. Which means Shondaland’s TGIT will now just be “TGIT” — a travesty. Which also means we’ll have a very large excess of popcorn and wine. Which is perfect to drown our tears in.

But Rhimes’s The Catch was renewed for Season 2, and she has a new show, Still Star-Crossed, joining the ABC family, because the showrunner and her brilliant mind is the gift that keeps on giving. Before Shondaland die-hards start torturing themselves Jake Ballard-style wondering where the hell Scandal is going, know that there’s a serious catch.

Scandal is only being removed from the Shondaland block temporarily, and the reason is actually the best thing ever. It’s because of Kerry Washington’s second pregnancy, which was announced a few weeks ago. She and husband Nnamdi Asomugha — the most low-key couple of all-time — are reportedly giving 2-year-old daughter Isabelle a little brother and sister. Need I remind everyone of how adorable Washington is when pregnant? Never mind generally in life?

Here I am, letting out a huge sigh of relief as I guzzle an Olivia Pope-sized glass of red wine knowing everything is going to be OK. Scandal will return in the 2016-2017 midseason schedule, and soon I’ll have perfect pregnant pics to look at. I’m not saying it’s OK — I gladly haven’t had a life on Thursday nights in five years — but this news at least lessens the blow.