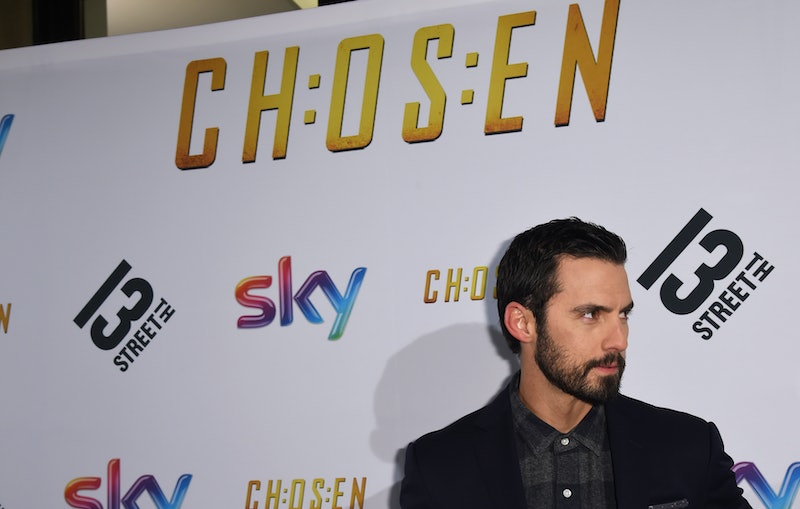 Alright, are you sitting down? This is some pretty serious Gilmore Girls revival news I'm about to drop in your laps and you should probably be sitting down. Take deep breaths, because it involves Jess Mariano, the boyfriend who ended up being 50 percent of Rory Gilmore's (greatest) most passionate relationship. OK, you're sitting? I'll begin. In an interview with Vulture at the Entertainment Weekly and People upfronts party May 17, Milo Ventimiglia, who plays Jess, considered what would happen at a reunion for Rory's exes. OK, so it's not the craziest of news, because Ventimilglia can "neither confirm nor deny anything" about any such reunion — but, with what we know of the revival so far, a reunion of Rory's previous boyfriends could very much be in the cards.

At least from how Ventimiglia describes older and wiser Jess, it won't be a fist-fight type of event. Ventimiglia claims that Jess has matured into a, "A very, very decent guy but he never lost his angle of disdain for things that pissed him off. But he chose to help others along in a more positive way..." In other words, he isn't the type to start a fistfight over a relationship from high school, even if it is with his soulmate.

Ventimiglia also went on to say:

When boys are boys, they’re at odds, but when they grow up and you’re aman, you could look across the aisle at another man and be like, ‘Hey man, I respect you — where you are now, and I respect where you’ve been and I’m happy to see you.'

It is worth noting that, in the interview, he realized he was actually thinking how Ventimiglia would act, and not Jess Mariano. Does that then mean a reunion won't be happening since he couldn't think how Mariano would act? Or is the actor being a typical Jess and just toying with us? There are some pretty reasonable places a reunion of these guys could happen, so it almost seems necessary to the story.

Since the actor who plays Richard, Edward Hermann died in 2014 and will not be replaced (because that would actually be a horrible thing to do), it stands to reason there will be some sort of funeral scene. Though Richard didn't love any of the men in Rory's life, I'm sure they would roll up and say a last goodbye anyway.

3. At The Stars Hollow Musical

Another event we know about the revival from the mouth of Sutton Foster to Vulture's ear is that there will be a musical in Stars Hollow in the "Summer" part of the four part series and Foster will play the lead role. I'm sure the boys enjoy the theater, and for various reasons each of them could be convinced to come. Maybe they'll bump into each other?

Stars Hollow isn't a big town and the Northeast of the United States is also pretty small in the world of TV, so Rory's three exes could meet in any sort of exciting way. Part of me is secretly hoping there is a brawl. Only time will tell!