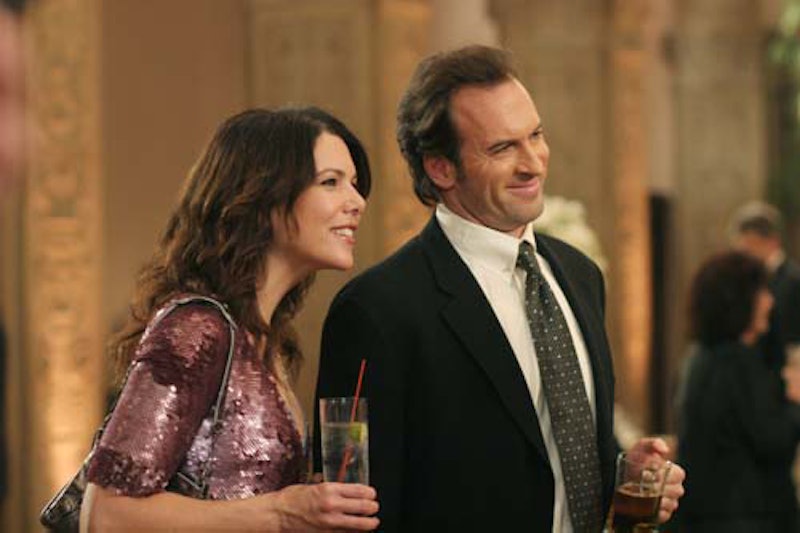 This may be the biggest spoiler from the Netflix revival so far: it looks like someone on Gilmore Girls is getting married. Gilmore Girls News found a photo of a prop on Instagram that is clearly marked "Wedding." But just who is the happy couple? There are a few options, but at the moment, Luke and Lorelai, or Rory and Logan are at the top of the list. Sorry Jess fans, but the return of The Life and Death Brigade boys in one episode are making a Rory and Jess union seem less and less likely.

While nothing has been confirmed, the prop in question and its accompanying sign definitely suggest a couple will be heading toward marital bliss, with filming of the event set for March 18. Is it possible the wedding won't involve one of the Gilmore women? It might be the case, but don't be surprised if Rory or Lorelai (or maybe even both) end up walking down the aisle by the time the last episode, "Fall," rolls around. Depending on who the groom is, this wedding could be the highlight of the year for Gilmore fans, or it could end up being a majorly controversial plot point. Series creator Amy Sherman-Palladino has always followed her own heart where Lorelai and Rory are concerned, so don't expect her to shy away from a more scandalous option.

Take a look at the tell-tell props, and then let the wedding speculation commence.

But just whose wedding could it be? Here are a few guesses.

Fans have been clamoring for a Luke and Lorelai wedding since Season 1. There's no doubt that the duo should be together, and I would love to see them finally stand under that chuppah, but after nearly nine years, shouldn't they have tied the knot by now? Luke and Lorelai could have spent the years since the finale cohabitating without putting any rings on their fingers, and Richard's passing could be what inspires them to make it official. However, it seems just as likely that these two star-crossed lovers said "I do" a long time ago.

Rory turned down Logan's marriage proposal in the series finale to hit the campaign trail with future President Barack Obama. There is an excellent chance that Rory's journalism career is now thriving, leading her to be in a place more conducive to settling down. Sherman-Palladino has confirmed Rory will be single when the revival begins, but by the time "Fall" rolls around Logan and the male members of The Life and Death Brigade will return for what sounds an awful lot like a bachelor party.

This doesn't necessarily mean the bride is Rory. Logan could be marrying someone else, and Rory is invited to the party, but that seems like an awfully flimsy reason to bring back so many secondary characters.

Jess will be back for three episodes, but there is no evidence that he and Rory will be reuniting. Perhaps Sherman-Palladino has put the entire subject on lockdown to keep fans from catching on. If so, she truly is a mad genius, and is doing an excellent job at planting foilers. As beloved as Jess and Rory are, there is no way this couple can be completely counted out — just because there will be a wedding doesn't mean the bride will go through with it. There is always the possibility that Rory will end up riding off into the sunset on the back of Jess' motorcycle even if she does have plans to marry someone else.

Hey, Sherman-Palladino left the Gilmore Girls before Christopher and Lorelai got hitched in Season 7, so who is to say she doesn't have her own plans for the couple? This is the longest of long shots, but no one has ever accused Sherman-Palladino of being predictable.

Let's forget about the possible groom(s) for a second. What if Lorelai and Rory have a double wedding? And Emily walks them down the aisle? Would you even care who was standing beside them at that point? At its heart, this show will always be about Rory and Lorelai, and if the series ends with the mother/daughter duo taking a big leap into their futures together, I will cry all the happy tears no matter how I feel about the guys waiting for them at the altar. Those famed last four words, might just be: "I do, I do."

A wedding is coming, Gilmore Girls fans, are you ready for it?