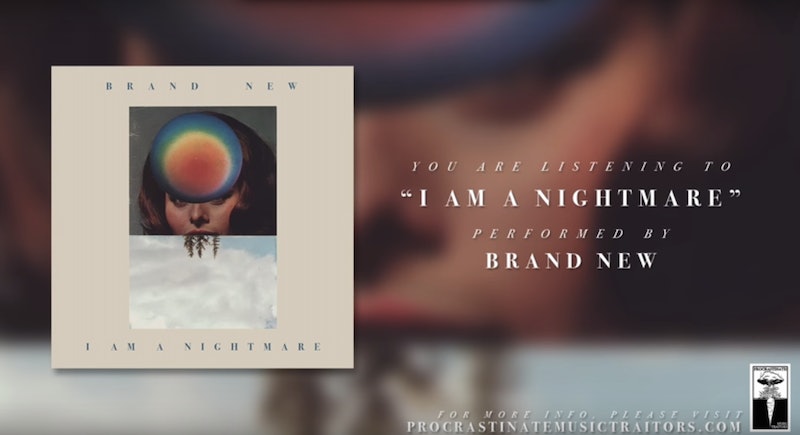 Be careful of a change that may occur upon your first listen of Brand New's latest single, "I Am A Nightmare." Suddenly, as soon as the percussion hits, you will find yourself slouching in your chair, pulling chunks of carrot out of your braces, and rocking gel bands all up and down your wrists. "What? What just happened to me? And why am I suddenly wearing this The Nightmare Before Christmas tee shirt from Spencer's?" But don't worry guys, it happened to me too. Because Brand New's latest single sounds like their old stuff — like, something straight off 2001's Your Favorite Weapon or something!

It's been so long since Brand New gave us anything to really assist in memories of the angry listening we did as preteens/teens. Their fourth album, Daisy, was all well and good but it felt like an ending — so much so that it was even rumoured to be the band's last album together. Thankfully, a theory that front man, Jesse Lacey, refuted in an interview with Drowned In Sound , saying, "It might be our last full-length record for a little while, but we've got a lot of things lined up that we want to record so I think that will happen pretty soon." Even if it wasn't an ending, it was still not as upbeat as earlier albums.

"I Am A Nightmare," is a single on Brand New's upcoming album, which they began working on in 2009, according to Drowned In Sound. It will be joining their other shared singles, "Mene" which they dropped on April 13, 2015 and "Sealed To Me" which they performed at a Los Angeles concert in the same month. But "I Am A Nightmare" wins the Y2K prize, because its vibes are so 2000. The song seriously harkens back to the upbeat and often lovesick jams of Deja Entendu and Your Favorite Weapon.

Sure, the band members' sing-screaming voices sound different now which does it make it a little different from old school jams, but that just a natural part of the punk boy band process. It happens to everyone as we age, and that includes bands too. If anything, it makes the sound seem fuller.

Take a listen. If you all of a sudden find yourself wearing a choker and a studded belt, remember that I warned you.