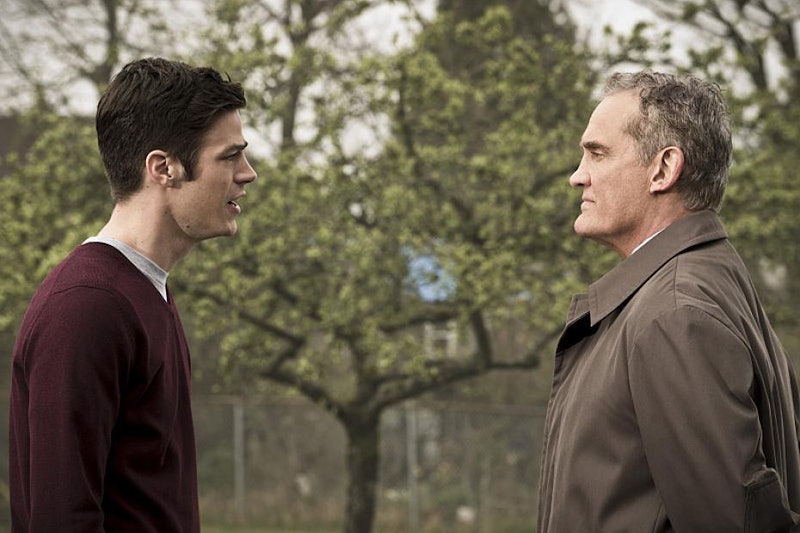 It's official, Barry Allen has become just as tragic as most animated Disney protagonists. Or, at the very least, almost as tragic as his fellow tragic superhero, Oliver Queen, but that's a comparison for another day. If you were thinking that Barry pretty much jinxed everything by being too optimistic throughout the May 17 episode of The Flash, you'd be right. Because in the eleventh hour, in the same spot in the same house where Barry's mother was murdered... Zoom killed Barry's father. But, we've seen a lot of fakeouts on this show before, so, I have to ask, is Henry Allen really dead?

Unfortunately, this isn't just some ploy. In the preview for next week's episode, which you can watch below, Henry is being buried. He's gone for real, and the timing of his death only makes it more devastating. Just when Barry finally comes to term with his mother's death, gets his confidence back, and manages to temporarily put off the ruination of Central City, The Flash has Zoom, his arch nemesis, up and kill his dad. You know his dad, the same guy who was also just released from prison after missing Barry's adolescence because he was wrongfully accused. The same guy who took some time away after his release to "find himself." The same guy who just came back and promised Barry that he'd finally be around for the long haul. That guy.

What gives, The Flash powers that be?! Well, let's be real here, we all know what gives, because Zoom told us. He's trying to convince Barry that they are the same. That Barry is or can potentially be as evil as he is once everything he loves is stripped away. Zoom forced Barry to watch his parent being killed because that's what Hunter Zolomon was subjected to as a child. It's one of the many things that set him on his path to being a villain.

But what does this mean for Barry? Is he going to turn dark like Zoom? I don't think that will happen, but he will absolutely be forever changed by this loss. In a way, Henry was Barry's physical representation of hope that emerged from his dark childhood, which has now been extinguished by yet another tragedy. In the end, though, I think Barry will make sure that his father is avenged, and Henry's death might actually be the final push he needs to defeat Zoom once and for all.