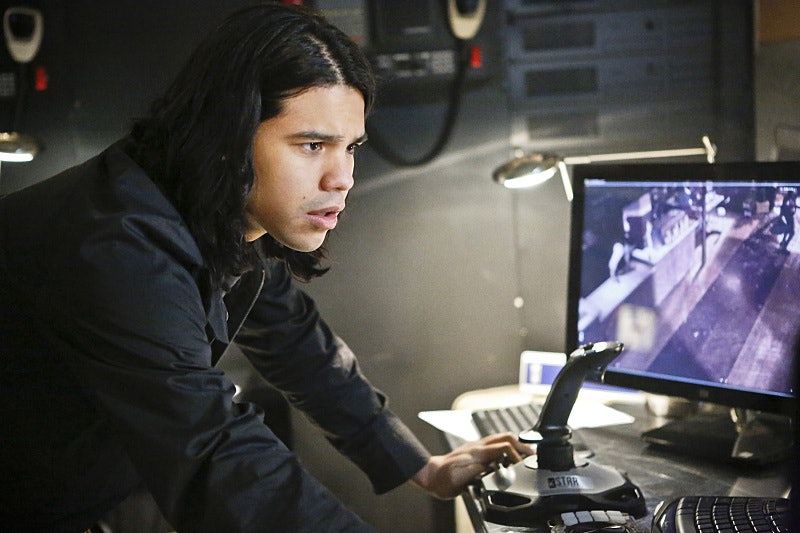 Season finales on superhero shows are pretty much guaranteed to bring chaos. Gloom and doom abound, as do potentially world-ending situations. Obviously, The Flash is no exception to this rule. Sure, The Flash Season 2 finale, airing on May 24, points to an epic (and final?) race between Zoom and Barry, but the end of this week's penultimate episode foreshadowed another major focal point of the finale. Cisco vibed that Earth-2 is going to be destroyed, and Team Flash and friends look fairly torn up about it.

Of course, there's Wells and Jesse who are from Earth-2 and would lose their home, but there's another issue here: major events that happen on Earth-2 are sometimes replicated or "mirrored" on Earth-1, like the particle accelerator explosion. Of course, this doesn't mean that Barry's Earth is going to crumble too, but it does point to things being exceedingly dire.

This leads me to the aforementioned race between Zoom and Barry, as seen in the finale preview below. The two obviously have an ax to grind with each other, with Zoom kidnapping Caitlin, killing Barry's father and countless innocent civilians, and the list goes on. But, this seems bigger. It seems that there is more on the line here than old scores to settle or even revenge being sought. I think that Zoom and Barry will race to either save or destroy the world... or at least a world.

It's definitely possible that Barry will win the race. I can't see the villain succeeding in obliterating everyone, because, duh, there'd be no show to watch. But even if The Flash does win the race, that doesn't mean everything is going to end well. If Barry wins, I see him suffering another major loss — perhaps Earth-2. But if Barry loses the race and faces the consequences of that, maybe he'll make a major save elsewhere and Wells' home won't be turned to ash. Either way, he has his work cut out for him come in The Flash Season 2 finale.