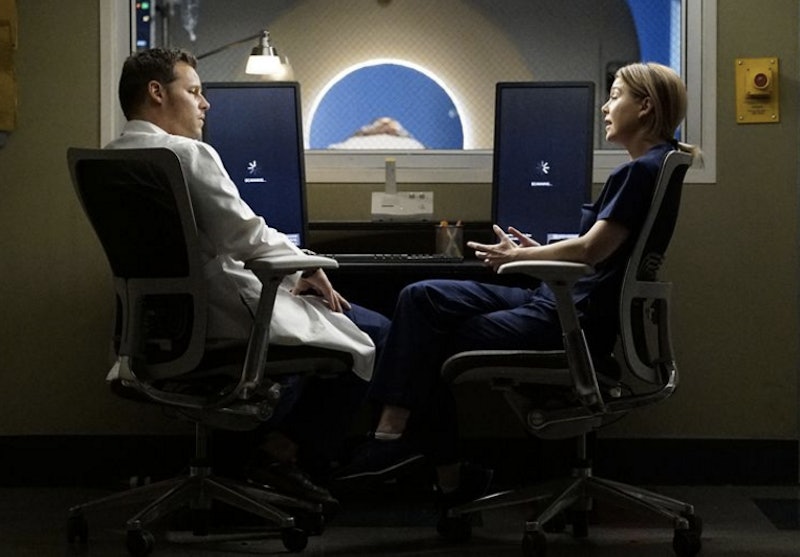 It's hard to believe that Grey's Anatomy Season 12 is coming to a close, but it's true: my favorite medical drama is now the same age as a seventh grader. As bummed out as I am that there are no new episodes until next fall, can fans all just take a minute to appreciate how amazing of an accomplishment it is that the show has gone on for 12 seasons and counting? We may all come for the hot doctors and tear-jerking story lines, but we stay because this show is addictive, and thankfully, it looks like it won't be over anytime soon. But now that yet another season is coming to an end, only one question matters: when will Grey's Anatomy Season 12 be on Netflix, so we can re-watch all these episodes again?

Unfortunately, no official date has been released just yet, but if ABC decides to follow the show's pattern from the last couple of years, the wait could be pretty short. In 2015, Season 11 hit the streaming platform in mid-June, which means there are probably just a few weeks between the season finale and the show's Netflix debut. In fact, by the time you're fully recovered from Thursday night's season finale, it'll be time to relive all your favorite scenes from the past year, and trust me — you'll need to. So much happens on this show that it's definitely worth a re-watch before Season 13 eventually arrives.

When Grey's Anatomy Season 12 does come to Netflix, here are the episodes you have to watch ASAP.

After Season 11 concluded with the (still heart-wrenching) death of Derek Shepherd and showed how Meredith recovered immediately after, the Season 12 premiere dealt with what her life looks like after the dust settled. In the episode, Mer is living with Amelia and Maggie, and she's almost back to her old self. It's not the most eventful episode, but watching this one is key to setting yourself up to relive the rest of the season.

I love this episode purely for the fact that Meredith stands up for herself in such a perfect way. OK, sure, Alex is dealing with deciding which baby gets the transplant, but that's beside the point. About negotiating salaries, this episode highlighted the very real wage gap between men and women, and it's awesome seeing Meredith gather the confidence to ask for the amount of money she's worth.

Episode 5, "Guess Who's Coming To Dinner"

There have been a few Grey's Anatomy dinner parties, but this one is definitely one of the most eventful. In this ep, Penny is introduced as Callie's girlfriend... and Amelia and Meredith are forced to deal with one of Derek's doctors being thrown into their daily lives. With all the drama, this one is really fun to watch.

Episode 9, "The Sound Of Silence"

After Meredith is brutally attacked by a patient, this episode tells the story of her recovery, and a lot of it is silent because Meredith can't hear. It's a beautiful episode to watch — and one you have to pay a lot of attention to, because so much of it is without sound. Plus, fans so rarely get a happy ending on this show that you really have to appreciate it when Shonda Rhimes throws one at you.

Heralded on Twitter as "Japril: The Movie," this episode tells the story of April and Jackson's relationship. Not gonna lie — as a huge fan of this couple from day one, this installment made me all kinds of emotional.

I absolutely adore Bailey and don't think she ever gets the screentime she deserves, so I'm a big fan of this episode because it gives Chandra Wilson a good opportunity to show off her acting chops. It's obviously hard for Bailey to discipline her own husband, but she does it anyway, and I love how easily you can see both sides of their argument here.

This episode is everything Grey's Anatomy is at its best: Heartbreaking, relatable, and able to remind us all why we fell in love with these characters in the first place. It's so difficult to watch Callie and Arizona, who were once so in love, fighting over their daughter in the court room, but it brings a new dimension to the show that makes it hard to just choose one of them to root for in the end.

Grey's Anatomy Season 12, you were so good to us. I can't wait to watch these episodes again.