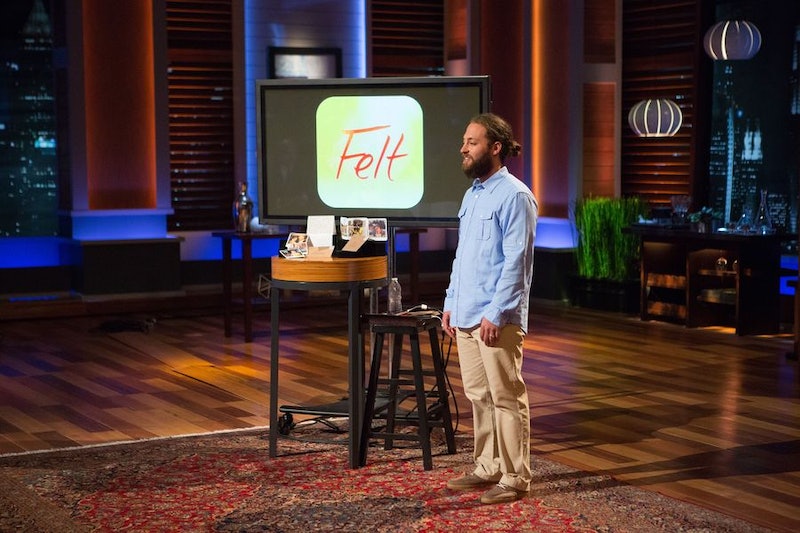 We're more connected today than ever before. And don't get me wrong; it's great to be able to get a hold of someone with the click of a button. However, isn't there just something so cold about that sans serif black text set against a white background in an email, text, or instant message? If you feel the same way, then you're definitely going to want to know about Felt handwritten cards from Shark Tank .

As the name of this company suggests, this product is going to make you feel something. But don't let the name fool you, either. Felt means business, and it's not only going to rely on nostalgia to make those dollar dollar bills. There's also some serious 21st century technology behind Felt, so it's definitely a company that could change up how we do an everyday activity in the future.

Who knows? Felt could even become a household name one day, especially if it scores a deal with a Shark. Felt actually reminds me of GrooveBook, since this company, which struck a deal with Mark Cuban and Kevin O'Leary in Season 5 of Shark Tank, is an app that puts your smartphone photos into a paper book for you to admire forever and always (you'll see why Felt is similar in a minute). GrooveBook went on to be sold to Shutterfly for $14.5 million in 2014, so obviously Felt would be lucky achieve the same level of success.

But will it? Well, Mark and Kevin will be in the Tank during Friday night's episode, so it certainly has a good chance. And as the final episode of Season 7, perhaps Sharks Barbara Corcoran, Lori Greiner, and Robert Herjavec will want to go out with a bang and take a chance on investing in this very intriguing company.

We'll have to wait until Friday night's episode airs to see how it all shakes out. Until then, read up on what Felt is all about, and you'll probably start feeling some feels yourself.

Email is certainly easier, but there's really nothing that has been able to replace the feeling you get when you receive a handwritten letter in the mail. But going out and buying the card, the envelope, the stamp, writing out the whole note, and finally mailing it does take some time and effort. Felt hopes to bring back those warm and fuzzy feelings but without all the hassle. It's a mobile app that allows you to handwrite and send cards in your very own penmanship without you ever having to pick up a writing instrument.

You Can Feel It Now

Felt is available now to download for free from the App Store, according to the company's website. But of course, you've got to pay to send each of the cards. The website lists a square card and envelope as costing $3 each to send. Add on a buck to mail internationally. Depending on the kind of greeting cards you buy, this is actually pretty comparable to sending one yourself, so luckily you don't really have to pay extra for convenience.

If you've ever used an app before, you're basically already a pro at using Felt. All you have to do is open up the app, select a card or a photo, use your finger or a stylus to write out your message, and then handwrite the address on the envelope, as the company's website describes. Your card is then printed out and mailed within 24 hours with a first class stamp. The thought of not having to lick an envelope is already a relief.

There's A Card For Pretty Much Everyone In Your Life

Felt has cards you would expect from any greeting card company, including ones to wish someone a happy birthday, thank them, and say happy Mother's Day, all of which you can view on the company's official website. But just like the whimsical designs on the cards, some of them can be sent to people who don't always have an aisle reserved for them at your local Hallmark store, such as its new mother-in-law collection launched just in time for Mother's Day. The quirkiness of the company shines through in the cheeky messages on its cards, too with sayings like "Happy Mother's Day to the woman who birthed someone I have sex with" and "You didn't give me life, but you're certainly all up in mine now." After seeing these, I'm definitely curious about what designs Felt is going to come up with next.

The Founder Used To Send Messages A Different Way

By now, it should be clear that Felt is a company that could pique your interest on many different levels, from its design to its tech to its sentiment. But the entrepreneur behind Felt, Tomer Alpert mainly has a background in something a little different: car technology. Before starting Felt, Telluride, Colorado-based Alpert worked for the automobile video company SiSteR Technologies and FirstLook/MAX, companies whose software helped with the retail management and digital marketing of cars, according to his LinkedIn profile.

It Had (Unsurprisingly) Sweet Inspiration

However, it only takes an instant for your life to take a completely different turn, and that's exactly what happened to Alpert. After his then-girlfriend suggested they send a handwritten note to thank the hosts of a dinner party they had just left, Alpert got the idea that there should be an app to send such a thing, especially since it was late at night when stores might not be open, according to a February 2014 article on OZY.com.

They did some research and found that many services sent cards with printed text but not handwriting, which is really the point of sending a card, anyway. "To us, that wasn't what a thank-you card was. A thank-you card was something you handwrote, so it was like, OK, let's see how cool we can make this and how authentic an experience we can create," Alpert told the website. "For us, the magic, the thing that excited us the most, was starting on an iPad, but not changing what a handwritten card meant."