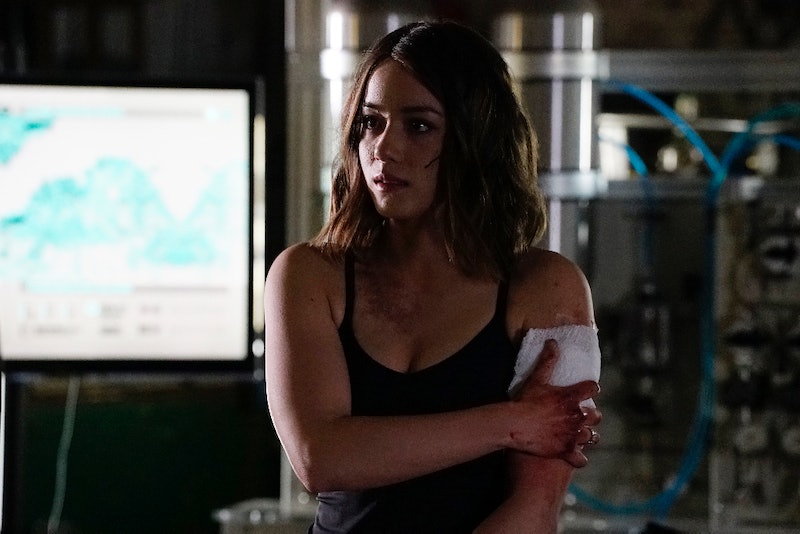 The Agents of S.H.I.E.L.D. Season 3 finale sent us six months forward in time to a future that raises so many questions. It seems that the team has been forever changed from their showdown with Hive. For example, Daisy is Quake on Agent of S.H.I.E.L.D. now, but the anticipated Marvel comics name change comes with a price.

In the future, Daisy is on the run from Coulson and sporting a punk/emo makeover. Hive's sway gave Daisy a taste of the dark side — has she embraced it? I doubt that. Quake is more Jessica Jones than Anakin Skywalker. Coulson's newspaper clippings reveal that the mysterious vigilante has been dubbed "Quake" — and that her moral alignment is dubious. Oh, and she can also basically fly now. No big deal.

Not only does Daisy have a dark makeover in the near future — but Coulson's not the Director of S.H.I.E.L.D. anymore. Who do we think the new director is? My money's on Melinda May, but I also would love to see Maria Hill at the helm. I miss Agent Hill, especially since she did not appear in Captain America: Civil War. Though, to be fair, Coulson didn't specify which organization this "director" was running. Maybe Daisy isn't the only one who's left S.H.I.E.L.D. in six months.

Meanwhile, in the tag, Doctor Radcliffe and his operating system named Aida had a chat, which ended in the reveal that the doctor has developed some kind of android, artificial intelligence, Ex Machina nonsense. I caught the letters "LMD" on his computers, which probably stands for "Life Model Decoy" — a concept from Marvel comics that got a shoutout in the first Avengers movie and has been speculated as the explanation for Patton Oswalt's character on Agents of S.H.I.E.L.D. as well as Coulson himself. I never trust someone who makes a lady robot for fun, so my bets are on Radcliffe for the new Big Bad.

Basically, I'm super pumped for everything that Agents of S.H.I.E.L.D. Season 4 has to offer. From the looks of it, the adventure is only just beginning!